A kind of a follow up to the McRib review I did a few years back. Whilst out in Australia, I just had to visit on old favourite, Hungry Jack’s, the Australian subsidiary of Burger King, as it’s the only place you can order “The Aussie”.

“What’s so special about The Aussie?” You ask. Well, the burger, which is only available in Australia, is just like a standard Whopper™ which is available globally, except it also has beetroot (which replaces the gherkins) bacon, and an egg added into the mix. 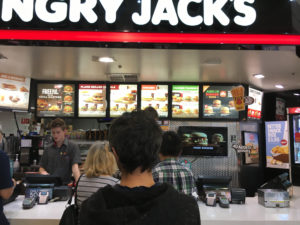 In the queue at the Hungry Jack’s branch at the Westfield Knox shopping centre food court.

So, after queuing for a few minutes, like any good British gentleman, I ordered my (double) Aussie Whopper. 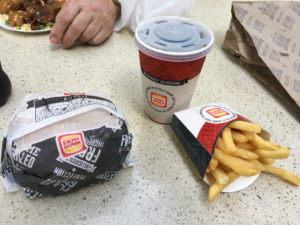 My meal consisting of the double Aussie, regular fries, and a Coke.

As it’d been a while since I visited a Burger King, I’d actually forgotten how much bigger their burgers were compared to  their competition, and almost started to regret ordering the double… almost.

This is classed as a “Premium Choice” item, official description from the Hungry Jack’s website reads: 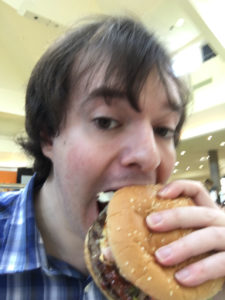 As you can see, this thing is huge. Face for scale! (Oh dear, what am I doing with my life‽)

So there’s me “wrapping my laughing gear around all that”. Ok, enough with the silly pictures. This thing cost me $11.60 AUD, which is roughly £7.09 GBP at the time of writing.

How does it taste? Really good. Like all the burgers at Burger King, the patties are flame grilled which, in my opinion, makes the whole thing taste more like a proper burger. The beetroot replaces the gherkins which you’d usually find on a Whopper, which may be to some people’s liking. The addition of the egg and bacon gives the burger a “breakfasty” taste which could be compared to “The 10:35” secret McDonalds item – an item that’s generally only available at the time the breakfast menu ends and the daytime menu begins.

I’d give this a 9/10 on the fast food scale of awesomeness, I’d like to give it a 10, but the lack of gherkins was a little disappointing. Of course, there’s nothing to stop you asking for gherkins to be added.

So, any Burger King representatives for the UK, any chance of bringing this to the UK? Even just for a promotional item.