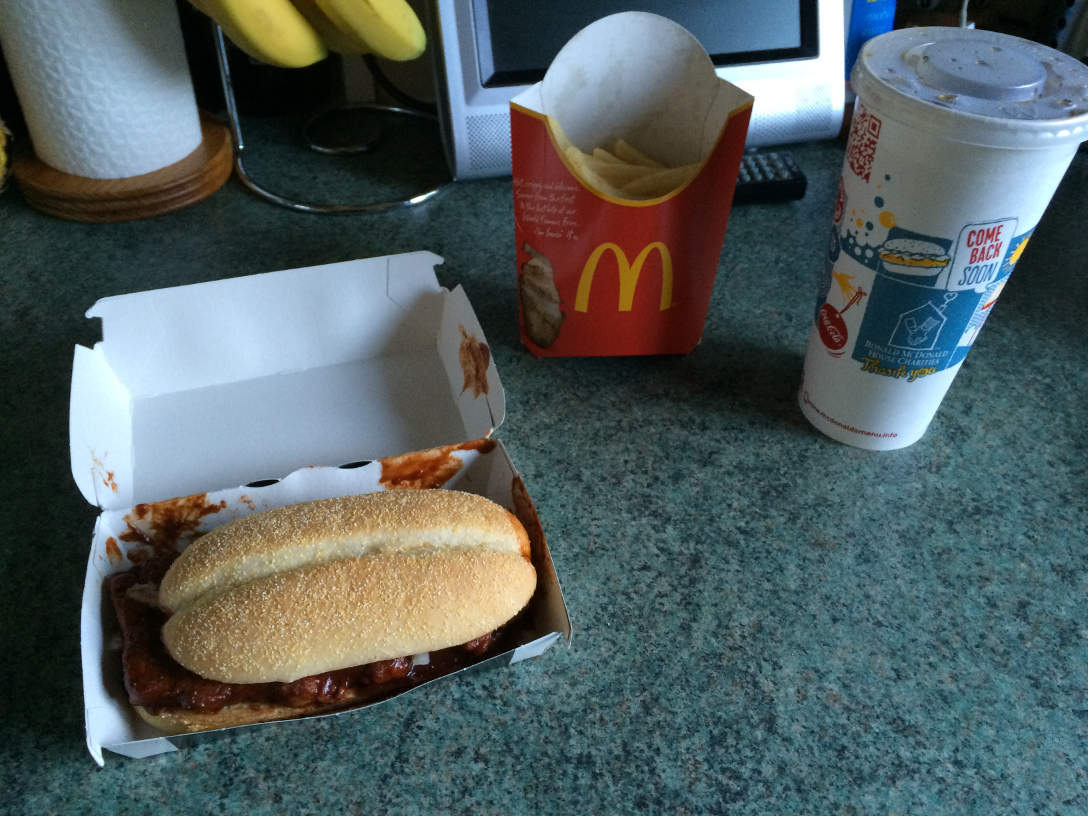 Let’s go for something a little different today, a food review.

So, for a limited time, the world’s largest fast food chain has brought back a particular item to their UK menu with quite a big marketing campaign. But what’s so special about the McRib? The only way to find out is to go out and try one myself. 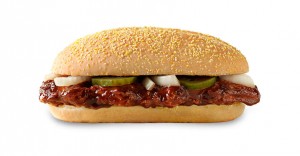 The McRib was relaunched in the UK for a limited time on the 31st December 2014 and is available until 3rd February 2015. It was originally introduced in America in 1981 and discontinued in 1985 due to McDonald’s executives claiming pork was not eaten often enough in the United States to warrant it being a permanent fixture on the menu, however it was deemed popular enough to be brought back as a promotional item. The McRib was first launched in the UK in 1998 but hasn’t been available for 12 years.

The sandwich was parodied in an episode of The Simpsons in 2003 (I’m Spelling as Fast as I Can – Production Code: EABF07) in which Krusty Burger introduces the “Ribwich”.

The Ribwich, a parody of the McRib on The Simpsons – Image Copyright Fox

In this episode they describe it by explaining how they create it:

We start with authentic, letter-graded meat, and process the hell out of it.

The episode goes on to hint that the meat in the product isn’t actually pig, when Krusty says “Think smaller, and more legs.” McDonalds, on the other hand, assure us that all their products are made with 100% meat.

But, enough with the history, lets go and get one… 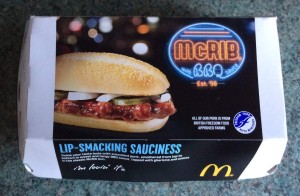 The box for the McRib

So what exactly is in the McRib? Well the description on the side of the box reads:

Tickle your taste buds with succulent pork, smothered from to to bottom in sweet and tangy BBQ sauce, topped with gherkins and onions in the classic McRib bun. 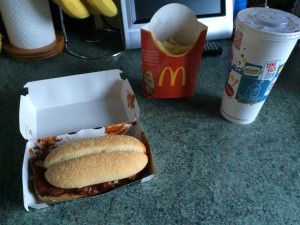 The box open with the rest of my large (a UK large is about equivalent to a US medium) meal – note, half of the fries were in the bag, but looked a bit worse for wear to add to the photo.

First thing I note here is the amount of sauce leaking out the sides, now though I personally quite like barbecue sauce, I’m not a fan of it in excess. But lets look under the bun to see exactly what’s in this: 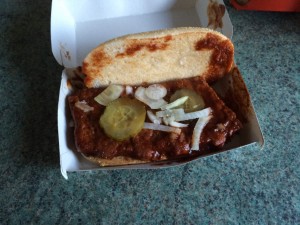 The top off the sandwich.

Less sauce than I was expecting actually, so that’s alright. But the only other components that make up this sandwich (other than the pork) are onions and gherkins (plus, there’s only two of them – yeah, I quite like gherkins, I’ve been known to happily take donations from other people’s burgers 😀 ), finally the size of the McRib is not that large. Interestingly though, the McRib only has 50 less kcal and 2 grams less carbs than a Big Mac, so maybe the size is justified here.

But of course, how does it taste? Actually, better than I thought. The sauce is a bit sweeter than most BBQ sauces, the slivered onions (rather than the diced onions in the Big Mac) give a better flavour which complements the meat and sweet sauce. I believe the sandwich would taste alright without gherkins too if you’re the kind that tends to remove them before consuming.

Overall, I give it an 8/10, only really complaint is that it could be bigger.

Don’t forget, they’re only available until 3rd February in the UK, and who knows when they’ll be available again? But at least, unlike in the Simpsons, the “meat” used won’t be made extinct due to the production!