Upgrading the firmware on the original Jawbone Jambox 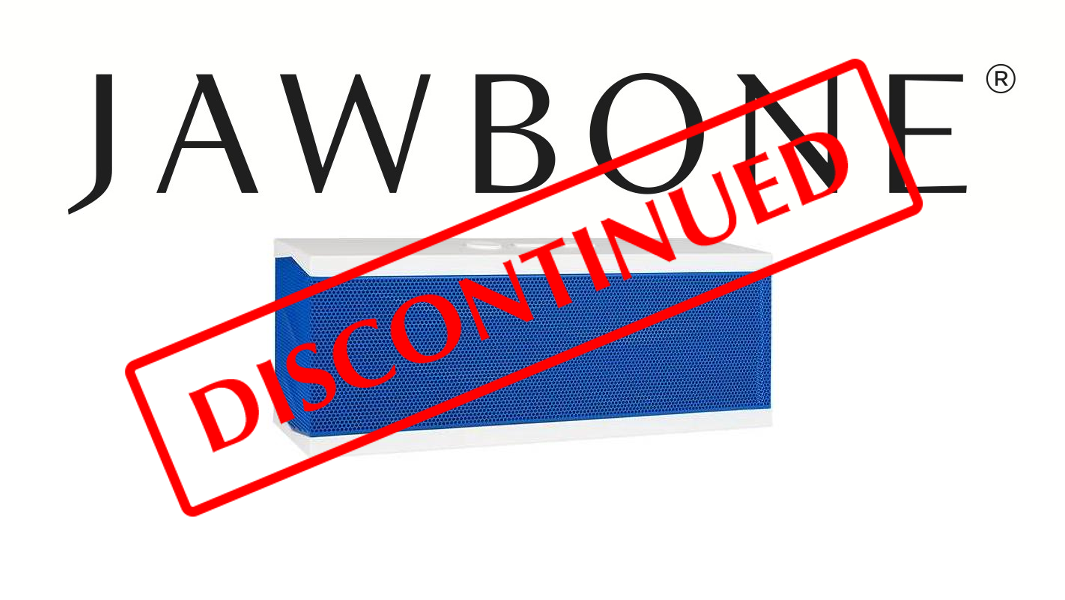 A few years ago, I bought myself a Jambox which was the direct result of a former colleague at work using one to play background music in the office. I thought it sounded pretty good, so decided to pick one up for myself. Like a lot of things, it got a fair bit of use for a while, then ended up in a box partially forgotten about. I recently rediscovered it and after charging it up decided it would probably be useful to use in my home office. Figuring that it had been a while, I should upgrade its firmware to the latest version as mine had never been updated and the latest version of the firmware added a couple of nice features. I then discovered there was a bit of a problem.

There is now a dedicated page which hosts the firmware files for all 3 Jambox models available here: https://robert.hawdon.net/jambox/

DISCLAIMER: This tutorial has been prepared in good faith in that it may help other users of the Original Jambox. This guide is published without warranties and flashing the firmware found on this page on your device is done so at your own risk. I (Robert Ian Hawdon) can’t be held responsible for damages caused by the software available here. 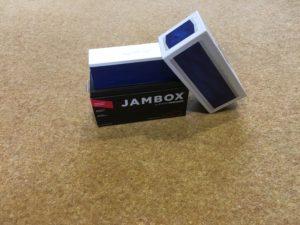 My original Jambox (Blue and White special edition) and its original box.

Jawbone has since discontinued the original Jambox, and whilst this is to be expected – companies do this all the time to keep users wanting to buy their latest gear, Jawbone took the decision to pretty much give the paying customers the finger and removing all support for the unit. By this, I mean totally removing support for the device from the updater software, and removing the last version of the firmware from their website. This is terrible as it almost forces users to purchase another device to replace a perfectly good one.

To put this into perspective, smartphone manufacturers will stop supporting their older devices when they get too old. This makes sense as their replacements are often faster and can support new features, but the difference here is that in most cases, whilst they don’t support their older devices anymore, they’ll still provide the last version of the software to allow those old devices to run. Heck, even my 10+-year-old iPods are still recognised in iTunes and can be restored to the last version of the software if required.

The worst thing of all is that Jawbone’s original Jambox is still a perfectly good speaker, and it would cost virtually nothing for Jawbone to keep the firmware available to update older devices to the last version of the software. The batteries in these devices are marketed as “non-replaceable”, so the average user base will eventually dwindle to virtually 0 anyways as these batteries expire. But for now, the original Jambox still works adequately.

But thankfully, it is actually possible to update the old devices to the last version of the firmware which Jawbone doesn’t make known on its current documentation.

Note: The firmware offered here is ONLY for the Original Jambox. Do not attempt to flash these firmware files to a Big Jambox or Jambox Mini. They will brick your device.

First thing’s first, you’ll need the Jawbone Jambox updater. This can be downloaded from Jawbone after creating an account on their website. At the time of writing, the latest version is 2.2.5. I can’t be certain any later version will work, and as Jawbone has a history of removing all trace of old versions, I have included this version here:

Unfortuneately, Jawbone have never released a Linux version of the updater software, a reason why my Jambox remained on version 1.0 of the firmware for so long.

Once you have this installed on your system, you’ll also need a firmware file. Jawbone allow the user to change the voice on the Jambox’s aural menus, this was achieved by packing the same version of the firmware with different voices. A redditor going by the name DerDaku tracked down the last version (2.2) of the original firmware files for the Jambox on Jawbone’s AWS servers. But just in case Jawbone decide to remove these files from their server, I have mirrored them here:

Before going any further, I highly recommend checking the md5sum matches the file you’ve downloaded as a bad download could brick your speaker.

Now you have both the updater installed, and the firmware file of your choice downloaded you can now do the following: 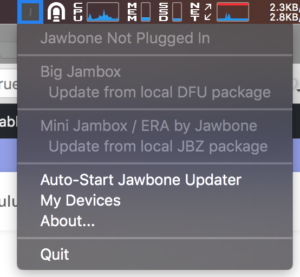 The updater program as seen on MacOS Sierra.

You will most likely have to remove the device from your Bluetooth devices and re-pair to start using the Jambox again. If you have opted to stay with the same voice that you were using before – and thus, unable to tell at a glance if the update actually did anything, you can test the new firmware has been installed by holding the volume up and down buttons together for 5 seconds and check if Live Audio mode is enabled. – I personally think the Live Audio mode sounds better, but if you don’t, you can switch it off again by holding the volume up and down buttons again.

If you happen to brick your device, it’s been suggested that version 1.6.2 of the updater software can recover the device. I have also provided that version here:

Unfortunately, I only have the Windows version available. I have also not had my device brick, so I can’t be certain first hand if the older version of the updater will resolve any issues.

If all has gone well, you’ll have upgraded your Jambox to the last version of its firmware. It’s a shame that Jawbone decided to completely cut off all support for the device. It’s business decisions like that that make it difficult for me to justify buying another one of their products. As regular readers will know, I prefer to repair, rather than replace, items when they stop working. (I will look into how to disassemble the Jambox when the battery eventually does pack in, but I have no plans to do so yet.) For a device to stop working due to aging components is one thing, but for a company to take planned obsolescence to the stage of removing the software required to make the device work is ridiculous, and almost encouraging the ever growing problem of electronic waste.

Whilst doing research for this article, it’s become apparent that Jawbone is a struggling company with a total loss of customer support as of recently. There are also hints of them moving away from the consumer market to enter the healthcare sector with their line of fitness trackers. This comes just over 2 years after the company completely washed their hands of the original Jambox, and my theory is that other paying customers weren’t happy with how Jawbone handles their legacy product support and decided not to buy replacement products. Of course, this is all just speculation.

Anyway, I hope this tutorial helps others in the same situation.