My adventures into the world of GNU/Linux. Part 6 – Just another Linux server 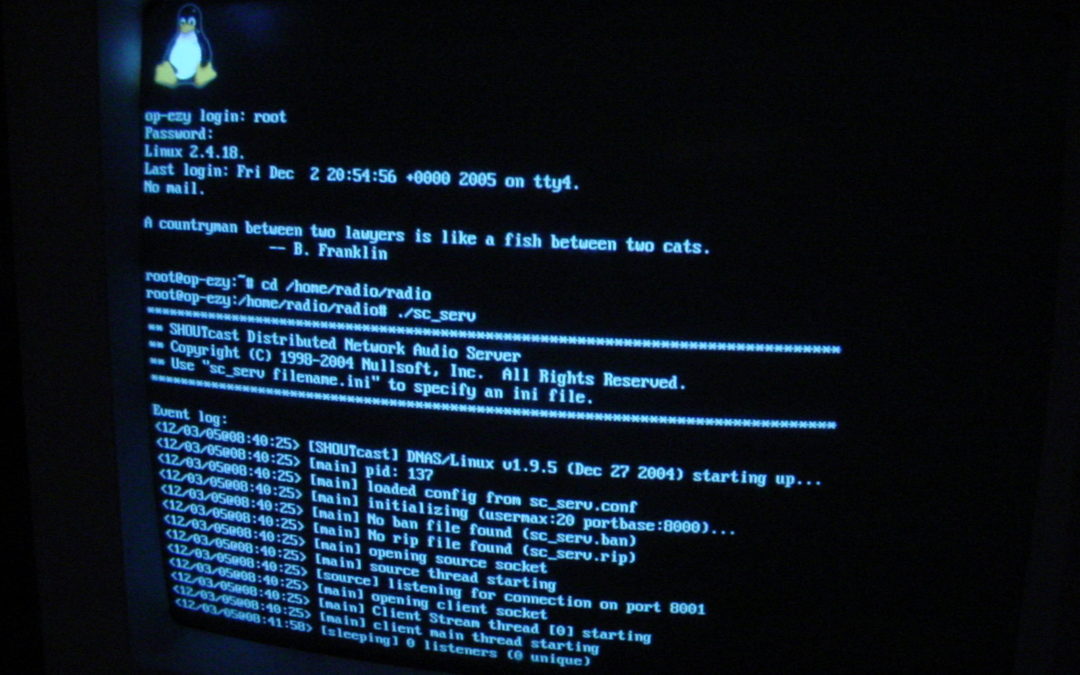 It’s been well over a year since the last instalment. But here’s the long-awaited 6th part. It’s now November 2005 and I’d been using Linux on and off for 3 years as a desktop/workstation. So I started looking at how Linux systems could be used as a server.

OK, the story here actually starts in mid-2004, where I had acquired an old desktop PC from High School, a Fujitsu ErgoPro x365 (actually, this was the 3rd, as the first two had been vandalised before leaving the , so this third machine was transported home on the school bus before it suffered the same fate). Originally, I had installed Windows NT 4.0 Server on it and planned to use it to host a WinMX chat room. With the demise of the official WinMX service in September and the fact the machine was rarely connected to the internet, the machine started to gather dust.

But in November that year, myself and a couple of friends decided to try and launch an online radio station using Nullsoft’s Shoutcast audio streaming software. I decided to repurpose the old desktop PC and, as system resources were limited, I opted to remove Windows NT, and install Slackware 8.1 – which was now 3 years old, but was the lightest, modern, system I had to hand especially as the 512 Kilobit Internet access I had was quite limiting.

I wonder how many times I can get away with reusing this image?

As I wasn’t exactly sure what software I needed to run a server at the time, when the Slackware installation screen asked what to install, I opted for everything – everything other than the X Window system and KDE.

Without a GUI, I entered the Linux server ecosystem cold, forcing me to drop the reliance on GUI tools and learning the essential commands. As things needed configuring by editing configuration files, I also had to learn the essential skill of quitting Vim.

Initially, I had been using the shell on the server directly, but as the room the server was living in got rather cold during the winter months, I searched into how to remotely access the machine, even if it was only from a couple of rooms away. It turns out the answer for this was very simple and the machine could be accessed securely using SSH (Secure SHell). Not too much of a learning curve as I had been getting used to working on the command line, only now I could work on my server in the comfort of a warm room in a chair, rather than on the floor under a desk.

As the server was located at home, there was another hurdle to overcome, and that was that residential Internet connections generally have dynamic IP addresses. I originally worked around this using a piece of software called Direct Update. Unfortunately, this was only available for Windows PCs, which meant I had to have it installed on another computer. I was not prepared to have this second machine running 24/7 – especially as it was located in my bedroom – so I went in search of a native Linux solution, this lead me to the DDClient project. DDClient did the job for many years and, due to the benefit of it being open source, had some fixes submitted to allow it to work with different dynamic DNS services I used.

By late December, the online radio station was closed. But the server was quickly re-purposed to host a website to host my GCSE Media studies project, with the expectancy of it to be online for at least a year after submission as kind of an easter egg for the students who’d undoubtedly be forced to watch it the next year and may choose to see if the website displayed at the end actually worked. It was at this point I started looking into hosting more content on this server and made the decision to keep the machine running 24/7.

As I was only using this server to host a personal site. There was plenty of room for error, I could quite easily afford to make a configuration error and have Apache refuse to start and spend a few hours with the site offline trying to fix it. These days, of course, I can try out new configurations in virtual machines before committing them to the live servers.

Of course, during this time, I was still using Linux on my personal daily driver. However, OpenSUSE was beginning to be troublesome for me (mainly around the software updater) so I was soon off in search of another distribution to switch to. However, that will be a story for the next instalment.