My adventures into the world of GNU/Linux. Part 5 – Portability, 64 Bit, Chameleons, and leaving via the Gate.

The long awaited fifth part to the saga.

In the last instalment, I had finally gotten online with a Linux system, and was able to perform everyday tasks on my desktop box such as word processing, browsing the web, instant messaging, and DVD playback. In this post, I’ll be talking about how I started using Linux on the move.

So the year was 2005, the previous Christmas, I’d acquired a laptop (an HP Pavilion zv5383EA) which, of course, shipped with Windows XP. I happily used this running Windows for a few months, but at this point, I had finally gotten Linux systems in a useable state and, realising the potential, I decided I just had to get Linux running on this too.

Of course, there were a few things I still required Windows for, mainly school work as work was often required to be sent in Microsoft Word format if being submitted digitally, and documents written on OpenOffice.org at the time didn’t always display properly on the receiving end. The same issues would occur when trying to open documents written on Word on OpenOffice.

To get around this limitation, I dual booted Fedora Core 3 with Windows. Then later, upgraded this to Fedora Core 4. Now, a great feature of the laptop I had was that it sported an AMD Athlon 64 processor, which I felt was a little wasted as the machine shipped with a 32-bit version of Windows XP Home Edition. So I opted to try the 64-bit version of Fedora. It was doing this that revealed an issue being an early 64-bit adopter: Proprietary software was often only available as 32-bit. A prime example of this was Adobe Flash. Whilst web browsers such as Mozilla Firefox were compiled to run natively in 64-bit environments, they required NPAPI plugins to be compiled for the same architecture. There were a few workarounds for this:

I attempted to use option 2 for a while, but there were a few compatibility issues, so I ended up reverting back to a 32-bit Operating System. Now, this does sound a bit extreme but, of course, you need to remember this was back in a time where Flash Player was almost a required component to be able to use the web. HTML5 was still a few years off, and some people/companies where even using Flash to build their entire website.

In late 2005, after being unsatisfied with Fedora Core 4, I made the switch to SUSE Linux 10 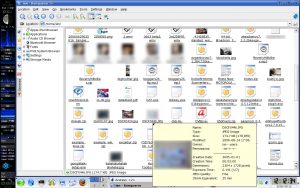 SUSE 10 Linux with Konqueror being used to browse files.

Editor’s note: The screenshots used in the post are mostly from the time, one thing to note is the status bar down the left-hand side, which was achieved with Conky. Unfortunately, I no longer have the configuration for that layout. Though, I believe a lot of the eye candy that was common on Linux systems at the time belong in the mid 2000s, and should probably stay there.

It was whilst using SUSE 10, in 2006, I decided to switch to Linux full time, only booting into Windows when I really needed to run an application that wasn’t able to run on Linux. But with the advancements in the Wine project, this was becoming less of a problem. It was even possible to run Internet Explorer through Wine if you so desired. Not that it was recommended. 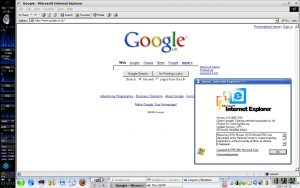 One of the goals of attempting to switch to Linux full time was to try and get it to play nicely with hardware that had no official support. One hurdle I already encountered on my desktop PC was the lack of support for the Broadcom wireless chipset, which I discussed in the last instalment. 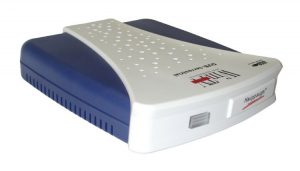 Another thing I wanted to do was to watch TV on Linux using a DVB decoder box. The one I had (and still have) was the WinTV Nova-T USB by Hauppauge. Hauppauge support on Linux was quite good – though not directly from the company, it was well known that Hauppauge developers were active in the Linux community – and plenty of guides were available to help get the device to work on Linux. The challenge at the time was to find the firmware for the unit, as the device itself requires the firmware to be loaded on it upon powering up. 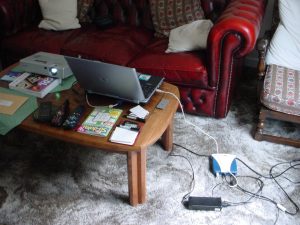 A photo showing the WinTV box plugged into my laptop running SUSE 10, with a projector acting as a second monitor.

Once I had sussed all that out, tuning the TV software (which was built into the media player in KDE called Kaffeine). 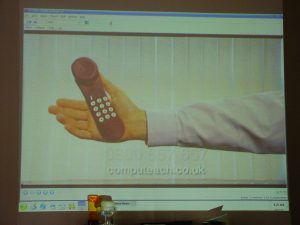 I also, at the time, was figuring out how to use multiple monitors on Linux. At the time, it wasn’t as easy as plugging in another monitor and enabling it in a control panel. Instead, you had to reconfigure your X11 (the Windowing System used on many UNIX like systems) server to use the second monitor. The way I had configured X11 meant I couldn’t move applications between monitors, and to open something on the other display meant closing it on one, and reopening it again on the other. I once used this to my advantage when using this machine to do a school presentation by using one screen to show the presentation, and the other to display notes, safe in the knowledge that my notes wouldn’t appear for everyone to see. 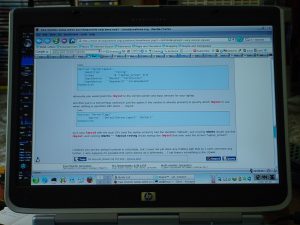 Firefox displayed on the other screen showing a forum post on LinuxQuestions.org about configuring X11.

After initially showing off SUSE 10 at school to some of my friends, I tempted some of them to give it a try. One of them wanted some screenshots of how I had set my system up, and the applications running on it, before deciding to try it out himself. This was back in a time where Live systems that were designed to run off the installation media, whilst not unheard of, were not widely adopted by the major distributions. 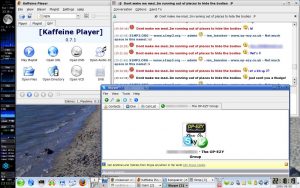 Showing off Kaffeine, Gaim (now known as Pidgin), and Skype running on Linux

In the end, they didn’t end up adopting Linux as their primary operating system, probably because it still wasn’t quite as user-friendly as Windows, or Mac OS X were at the time. For example, switching between wireless networks required you to reconfigure the network card, thankfully, unlike the advanced configurations I was setting up on X11, this could be done quite easily with SUSE’s graphical tool, YaST 2. 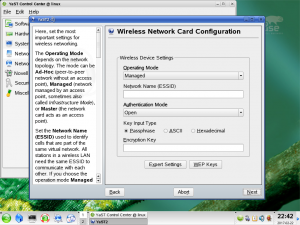 Configuring a network card with YaST2.

But I happily used SUSE 10 for a while, before upgrading to OpenSUSE 10.2 the following year, but that’s for a future post. Before I wrap this up though, let’s have a look at what the home page of my site (at the time of writing) looks like on the bundled browser. 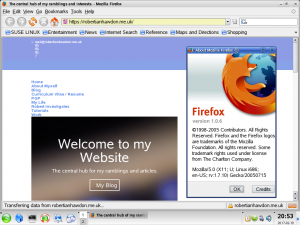 Well, time hasn’t been kind to Firefox version 1, but as HTML5 standards hadn’t been established in 2005, that’s understandable.

In the next part, I’ll be focusing on my baby steps into Linux server management.