Extending the life of my iPod for a few more years 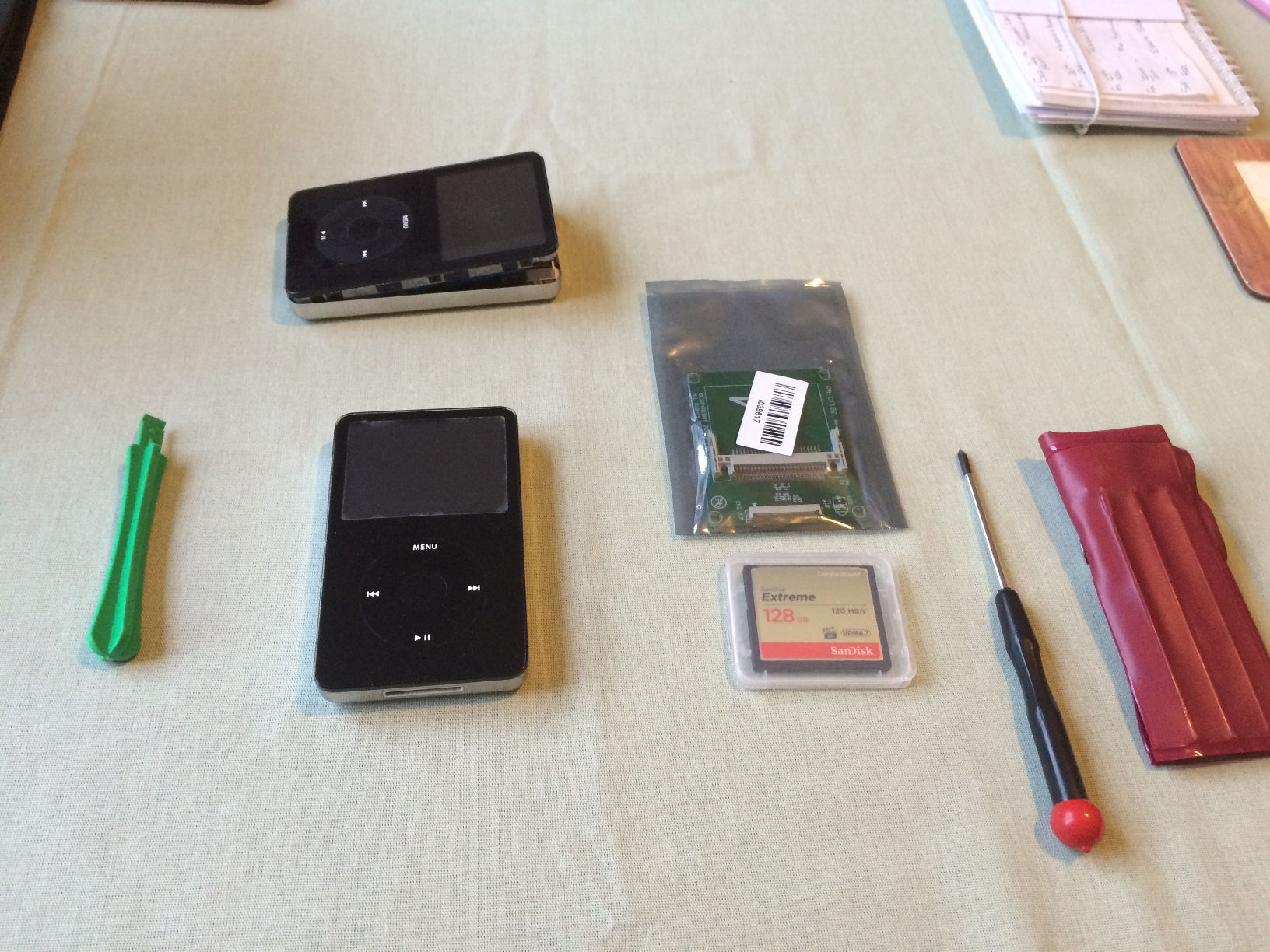 A few years ago, I wrote an article titled “Why I’m not letting go of my 5th Generation iPod“. Just over five years on, I’m still using it, though it’s time to upgrade it despite it being almost a decade old. 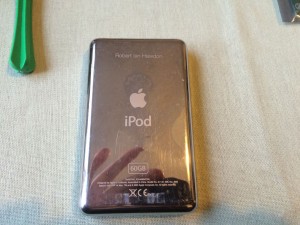 The slightly battered back of my iPod showing my name engraved. A service you could get when ordering directly from Apple free of charge.

Repairing and modifying this device isn’t a new thing for me, in fact, before I even wrote that post, I’d already replaced the battery once, and had replaced the logic board due to a broken dock connector, the first replacement was defective on arrival from China, with the hold switch failing to work and the battery connector falling off when attempting to take the unit apart again.

The first attempt at replacing the logic board with broken battery clip and serial number of the board. (May 2009)

Eventually, I bought a temporary iPod off eBay with a broken hard drive to use with my drive until another replacement board arrived. I since kept it for spare parts, which brings me on nicely to today’s post.

A couple of weeks ago, I noticed small cluster of dead pixels on the screen, which upon further inspection only seemed to be dead when the back light was on, almost like some polarisation issues. I decided to strip down the spare iPod and use its screen which I’d already confirmed was working. But I thought, if I’m going through the trouble of opening it, I might as well upgrade it too.

My 5th generation iPod (known as the iPod Video at the time) came with a 60GB hard drive, which has lasted over 9 years nicely. But with larger storage options available, I felt it was time for an upgrade. Now that large capacity flash storage solutions has become a lot more affordable in recent years, I decided to upgrade the storage to 128 GB.

“But why are you bothering with this device? Surely it’d be easier to get one of those fancy iPod Touches… or heck, even use your iPhone” I head you say. Well, some audiophiles (or audionuts as some people prefer to call them due to some of the ridiculous claims some reckon certain expensive upgrades to hi-fis and audio devices can improve the sound of music.) claim the later 5th generation iPods sound better thanks to the Wolfson 8758 DAC chip, which may be true, though, in my opinion, that’s completely null and void when dealing with lossy audio codecs such as AAC, MP3, Vorbis, etc. But the killer for me is the hackablity of these things both in hardware and software. Plus, I don’t need a touch screen audio player. Most of the time I’m listening to it, not looking at it. Also, I don’t like wasting the battery life on my phone by listening to music on it. 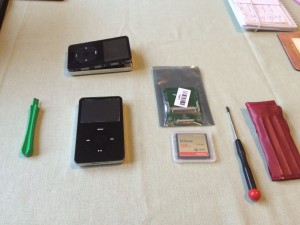 The 128GB Compact Flash card, the CF to ZIF adaptor board, the donor iPod, and the tools to open the iPod itself.

I decided to use a 128GB Compact Flash card (SanDisk SDCFXSB-128G-FFP for anyone interested in making the same mod) for this project even though there are some people claiming you can install a 1TB mSATA SSD into the unit. The main reason for choosing the much older Compact Flash technology is that it uses the same parallel ATA interface the original hard drive uses, and some claim the mSATA solution can cause the iPod to get very hot when transferring data to and from it.

I also needed to order a board that would convert the Compact Flash interface into the ZIF connector used on the original hard drive (The model number for this one if anyone’s interested is PA-CF18Z) which I could only find sourced from China. Finally, in the background of the picture above, there is the donor iPod I keep for parts.

The back off the iPod with the battery disconnected.

I always feel a little uneasy trying to unclip the battery from one of these as I’m wary of breaking off the connector again. On the plus side, if that does happen, the board on the donor iPod still works. You can also see from the image above, the battery in my unit isn’t the original one that in it when it shipped from Apple. 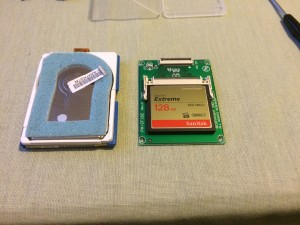 The Compact Flash card installed on the adapter board. It has roughly the same dimensions of the hard drive, only much thinner.

The adapter board I bought for the project is designed to fit in the same place as the hard drive and is similarly sized, I did find this rattled a bit in the unit, especially in the larger iPod (the 60/80GB models are thicker to accommodate a twin platter hard drive), but installing the rubber bumpers off the hard drive round the board provides enough friction to hold it in place. 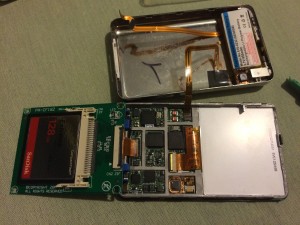 The screen replaced, the board connected, almost ready for assembly.

With the screen from the donor iPod in place and the board installed correctly (I mean, I didn’t install the ZIF cable upside down and spend over an hour wondering why the damn thing wouldn’t work… d’oh! 😳 ) it’s now time to snap the iPod’s back cover back on and to install the firmware back on it.

iTunes warning me that my iPod is in recovery mode.

I actually find it quite amusing that, although Apple stopped supporting the 5th generation iPod many years ago, the current version of iTunes (at the time of writing) still happily downloads the last firmware and installs it just fine. 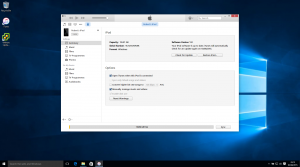 My fully working iPod reporting to iTunes that it’s the “128GB” model with 119GB of usable space.

Interestingly, after restoring, the iPod reports itself as being a “128GB” model… must have missed the one on the Apple website in 2005! I opted to restore using a Windows virtual machine, as I had further plans (anyone who’s read my post linked at the beginning of this article may have already guessed) which require the iPod to be Windows formatted. 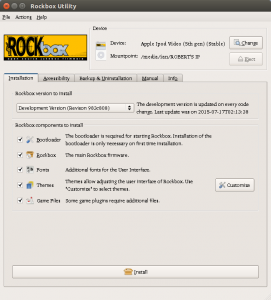 Of course, that plan was to install Rockbox back on the unit so I can continue to happily listen to my OGG Vorbis and FLAC formatted files as well as any rogue WMA files that might head my way. This time I chose to install a development build as there hasn’t been a stable release in over 2 years. 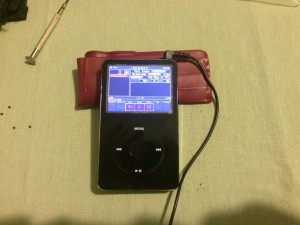 Finally, once Rockbox had finished installing, I copied across my favourite test album I’d use when restoring any audio device (used a lot when working on the S1MP3 project) – Paul Simon’s Graceland album.

I think this was a very successful and fun little project, and should extend the life of my beloved iPod for another few years.