Out visiting family in Australia again, as my website is no longer hosted from home, I’m not actually surprised that it’s still online this time. Of course, being a resident of the United Kingdom means that the process of getting yourself from one side of our planet to the other is a long one. 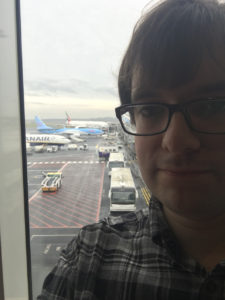 Me, standing in a café in the Newcastle International Airport (NCL) terminal overlooking the planes.

I opted to book with Emirates Airlines, as they fly out directly from Newcastle Upon Tyne, this also meant I got to experience two different Business Class cabins, as the first leg of the journey was on the older Boeing 777-300ER, whilst the later parts of the journey were on the newer Airbus A380 aircraft.

So, let’s start with the Boeing 777-300ER, click the image on the left for a larger version (Image from SeatGuru). As you can see, the business class is located at the front of the aircraft. It is arranged in a 2-3-2 layout catering for up to 42 passengers, whilst the economy class is arranged in a 3-4-3 layout and carries up to 385 passengers.

Passengers in the business class cabin of this aircraft get the following features: 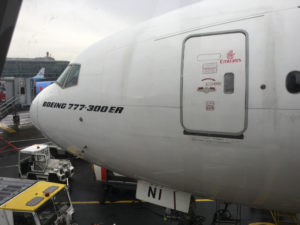 Let’s go into some more detail. Upon boarding the plane, you are directed to the business class cabin, compared to the economy section, there is a lot more space per person. When at my seat, the flight attendant introduced herself personally to each passenger, asking if they’d flown business class before, and explained how the functions of the seat worked. 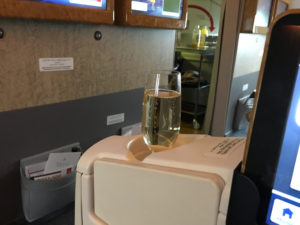 I was offered Champagne before takeoff, orange and apple juice was also available.

Before takeoff, passengers are offered Champagne, orange juice, or apple juice, all served in a real glass, these were taken away just before actually taking off. You are then offered a hot towel to freshen up. 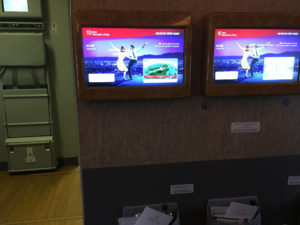 The ICE entertainment system on a big screen

The entertainment system is on a larger screen, just like economy, the screen uses touch controls, there is also a controller in the seat. Business class also get a tablet to control the system too, as well as perform activities on when the big screen is not in the best position to be viewed, such as when the seat is fully reclined.

Food is served at set times, but the quality is much higher than that of economy class. But I’ll save that part of the review for the next plane.

After landing at Dubai, and a 9 and a half hour stopover involving a short stay at the hotel in Terminal 3, it was time to embark on the second leg of the journey from the business class lounge. 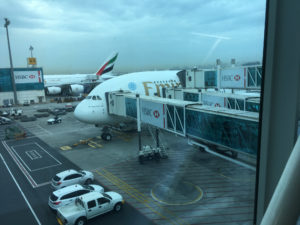 The Airbus A380 at Dubai International Airport (DXB)

The A380 is Airbus’s current flagship aircraft, I’ve included the image from SeatGuru on the right, click for a larger version. It is a double-decked design with the entire economy class taking up the bottom deck. Those seats are in a 3-4-3 configuration catering for up to 399 passengers, whilst the upper deck houses both the business and first class cabins. The business class is arranged in a 1-2-1 configuration, as is the first class. The business class cabin can carry up to 76 passengers, whilst first can carry 14 passengers.The following features are available in business class:

Whilst first class have the following extra benefits:

As I only travelled business class, I didn’t get to experience the latter features. 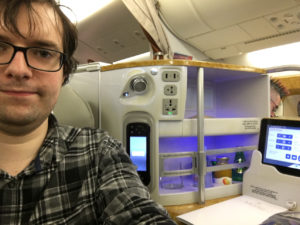 The switch from the Boeing plane to the Airbus felt like an upgrade in itself, here each business class traveller got their own little bunker with ample side table space, which I personally found useful to placing my glasses when trying to get some sleep. Putting the seat into bed mode resulted in a fully flat surface and, whilst I’m not very good sleeping on planes, I certainly felt more relaxed than I would in an upright seat. It’s important to note that both on the A380, and the 777-300ER, adjusting your seat does not impact on the passenger sitting directly behind you which, for me, gives peace of mind knowing you’re not disturbing other people. 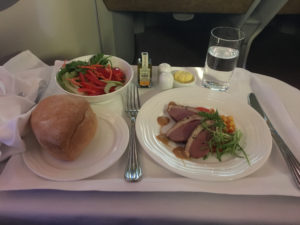 The food on board was of much higher quality than that of economy class, and a menu is located at every seat prior to takeoff to allow you to decide what you’ll want in advance. When it’s ready to serve, the cabin crew come round to make sure everyone’s tray is out, places a table cloth down, and you are presented with your meal, served on Royal Doulton china plates. Each meal comes with a side salad, and a small bottle of balsamic dressing, a bun, butter, salt and pepper, and a glass of water. A wine menu is also provided and wine can be ordered with your meal. After your meal, you are offered another hot towel to freshen up. 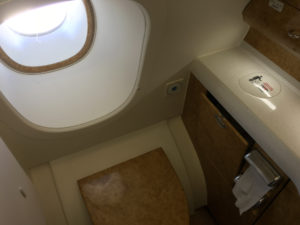 The facilities are slightly more spacious in business class

The toilets in business class are slightly more spacious, and even include a window to remind you that you’re pooping at 41000 ft. (12496.8 metres) ? 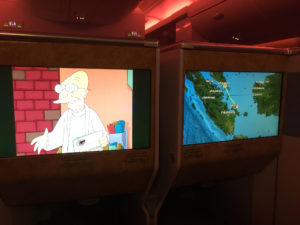 Watching Futurama on the entertainment system. The flight details on the screen of the seat next to me

My flight had a quick stopover at Singapore, it turned out that for a lot of the passengers – at least, in business class – this was their final destination, so the remainder of the flight to Melbourne was a quiet one, and the seat next to me was free. So I lowered the privacy guard between the seats and set that screen to show the flight information whilst I continued to watch TV on my screen. 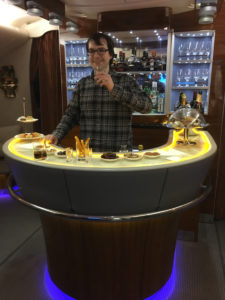 Standing behind the bar with a glass of whisky

At the back of the A380 on the upper deck is the bar, available for business and first class customers which serve a range of alcoholic beverages and snacks. As the flight was quiet, the crew let me stand behind the bar for this picture. 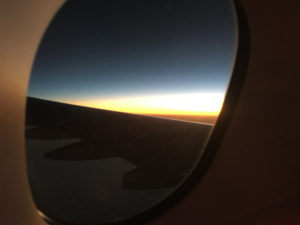 About 33 hours after I started my journey, I arrived in Melbourne. Business and first class passengers are given priority and are able to go through security more quickly than economy travellers, they also get their bags from baggage claim first.

So, would I recommend travelling business class? For long flights, absolutely. The extra legroom and comfort of being able to put your chair into a bed position certainly is a huge plus when travelling long distances. The downside being that you will, most likely, never want to travel economy again. For short flights, however, (less than 6 hours) depending on the time of day, upgrading from economy is not really worth it due to the hefty price tag. Another thing to take into consideration is that this review is specific to Emirates airlines, your milage with other airlines may vary. (pun, most definitely, intended!)