Why (and how) I forfeited my iOS jailbreak

About a year and a half ago, I wrote an article explaining why you should jailbreak your iOS device. Since then, a lot has changed in the iWorld and I have decided, at least for now, to switch back to an unmodified version of iOS on my iPhone 5S.

Think Similarly – Going back to an unmodified device.

Before you call me out for being crazy (either for un-jailbreaking my device, or for purchasing an Apple product, for money, in the first place 😉 ), I have a few reasons for this. The challenge I had, though, was keeping my data stored on my phone (SMS, Photos, settings/scores for certain apps/games) without restoring from a, potentially tainted, backup.

Firstly, my phone was unstable, it would restart springboard of its own accord, sometimes not even logging an error. Launching any app which launches the camera posed a 1 in 3 chance of crashing iOS and restarting springboard (usually booting me back to the Apple logo), these issues would generally go away if I forced a re-spring before using the phone. Previously, with my last phone, something caused a memory leak causing the phone to heat up after being switched on long enough. I got round this by either switching my phone off at night, or setting up a Cron task to reboot the phone at 4AM.

I’ve actually had issues with the camera not long after jailbreaking my iPhone 3Gs in 2010, and I was never able to track down exactly what caused the issue. Strangely, when upgrading to the iPhone 4S, there were a few months no jailbreak was available, during that time I was still having issues with the camera crashing. After a bit of research (over a years worth it seems), I’ve eventually concluded that whatever causes the issue was being backed up by iTunes, and the only way to fix it is to start afresh with a clean iOS installation and not to restore from a backup.

This was bad news, as part of the reason for the backup is to retain old SMS conversations and your camera roll, as well as settings in the apps you use. I did do a partial restore after I came back from America in 2012, but it seemed even that contained whatever was causing the issue.

So I decided to do a little more research, and came across an article on iDownloadBlog which explains in great detail how to take a backup, and extract the SMS data and import it to a fresh installation of iOS using a piece of software called iBackupBot. I decided to take it once step further and copy data such as: Photos, voice recordings, and app data (for selected apps) too. 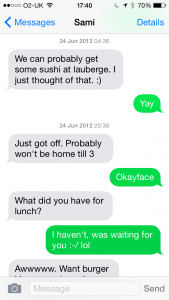 A screenshot of an SMS conversation I had with my girlfriend of the time (Who’s briefly mentioned in another post). Transferred to my new installation of iOS without restoring from an iTunes backup.

Side note: It seems iOS timestamps SMS messages in UTC and adjusts it depending on which timezone you’re in. I think a better way would have been to make a note of the timezone the message was received, so relevant times and the timezone can be displayed. But I’m digressing here.

As you can see, the import of SMS was successful and I didn’t lose any messages, so far so good. 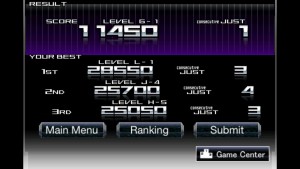 The scores of a game still saved.

And here you can see the high scores of a game have been retained. (The game in question is Mr.AahH!! by PONOS) 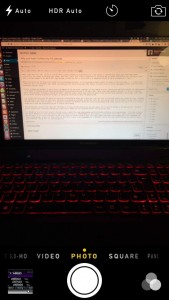 But, of course, the most important feature is that the camera app loads first time, and no longer crashes my phone at that key moment when that photo opportunity arises.

In conclusion, yes, forfeiting the jailbreak has made my phone a lot more stable, but is there anything I miss on a non-jailbroken device? The answer to that, is a small yes. The lack of F.lux does mean I tend not to use my phone as much at night. I’m hopeful Apple will allow for programs like F.lux to work on stock versions of iOS in the future. I may go back to jailbreaking my phone at some point, but for now, I don’t feel I particularly need to. (Your mileage may vary)