What if there was a Friends reunion episode… 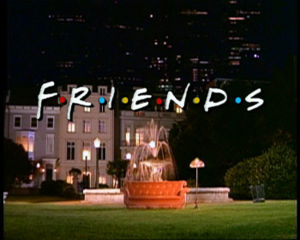 Ok, this isn’t really news, but I still want to talk about it.

A couple of months ago, the following image was posted on my Facebook wall: 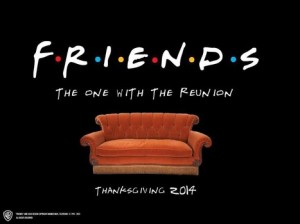 A supposed promo for Friends titled “The One With The Reunion”

This, of course, got people, of a certain generation, talking as Friends was, for those who were living under a rock, the TV sitcom that some people would say defined the 1990s, and still popular today with it being rerun on a daily basis around the world.

One of my secret confessions is that I’m quite a big Friends fan, though I didn’t really get into it until about 2 years after it ended. Like many others, I too was a bit excited to see this appear. But after a bit of quick Googling, this turned out to be a hoax.

But what if David Crane and Marta Kauffman did decide to sit down and write a reunion episode? I personally think if it was to occur, it should be no longer than a one off episode, as I don’t think they could eke out a whole season, maybe just an hour long special.

Here’s how I’d think an hour long episode would go down (forewarning, I’m no writer):

The show would obviously start with the familiar theme and intro.

After the familiar intro, the camera pans across the skyline of New York, then fade transition to the front of the Central Perk coffee house. Inside, we see a close up of two freshly brewed coffees, the camera zooms out to reveal Monica being handed the cups by Gunther, who’s apparently, still working there. Monica takes them back to the couch where we see Chandler, along with Jack and Erica, who are now 10, sitting on there.

Monica: I can’t believe how little this place has changed.

Chandler: I know, could this BE any more nostalgic? It’s just like old times.

Monica: The rest did say they were coming, didn’t they? What if they’ve forgotten? What if I’m cooking a feast for four? I cleaned our house for this?

Chandler: Will you calm down Monica? Of course they’ll be here… and you love cleaning!

Monica: *thinking for a second* Yeah I do!

Chandler: Well, we don’t have to worry about the leftovers now!

At this point, Joey would sit down and make some references about his move to Los Angeles (a direct reference to his spin off show – Joey). At this point, Joey is a bit more well off due to his success as an actor, and is staring in a new project that’s being filmed right there in New York. Just before going into details about film, Phoebe and Mike walk in.

At this point, a young gentleman walks in in his early 20s, and sits down:

Stranger: Dad said you guys would be here, and he’ll be here after work.

At this point, it dawns on everyone that this stranger is Ben, Ross’s eldest child from his first marriage. After a few shared memories, Ross and Rachel enter, along with an 11 year old Emma, plus another child, a boy, with a dinosaur t-shirt looking distinctly like Ross.

Chandler: Wow Ross… are you sure he’s yours?

From here, we find out that Ross and Rachel got married again, and settled. Ross makes a joke about being “divorce free for a decade”, and then the story would progress from there, involving Monica making her largest Thanksgiving dinner to date, with a few jokes about it competing with all other Thanksgiving dinners. Other well known reoccurring characters should also make an appearance, such as Janis, Frank Buffay, Jr., and Carol and Susan come to mind. 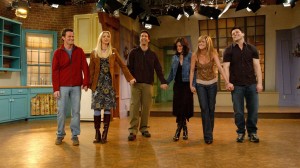 For the episode to be a success, all of the original cast would need to reprise their roles.

Ok, Like I said, I am no writer, but that’s how I’d think it’d go. There would obviously be more there, I’d like to think the writers would come up with something better to add to that. But sadly, as this was confirmed a hoax, this won’t happen.

Anyone got any ideas what they’d put in a reunion episode? Thoughts in the comments please.