The *nix environment for commoners

Thought I’d dive into something a bit different… well, by different, I mean exactly the same as usual. Another technical post. But hey, it’s been a while!

In a previous post, when I was talking about the time I started trying to learn Linux, I mentioned that there was a point during the installation where I was asked which graphical interface I wanted to use. The issue of not really knowing which was the best interface to go for is still something that crops up with novices today, but this was not just a problem isolated to Linux. Vendors of various Unix systems, in the early 90s, got together to try and come up with a unified graphical interface for their systems. Big names in the Unix world were amongst these, (the likes of HP, Sun Microsystems, and the Santa Cruz Operation (SCO)) who eventually ended up creating an interface known as the Common Desktop Environment (or CDE). Even by the 1990s standards, it had a very dated look and feel about it, but it was easy to use, and would mean someone who had used one system, could quite happily work on another.

There is a possibility I used this when I was younger, as I once visited my dad at work when I was 7, and they were using Sun workstations running Unix which could have been using CDE as its interface. But I don’t really remember that much about it.

For many years, CDE was proprietary software. That is, until August 2012, when it was finally released under the GPL licence, making it open source. As soon as this happened, work immediately started porting it to the other Unix-like systems, and Linux was no exception. 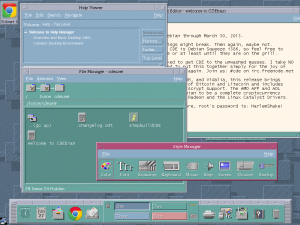 CDE with a few windows open.

I did try and install it myself on Ubuntu 13.04, which is apparently possible, but sadly it didn’t work for me. The group working on the port say that it’s not ready for a stable release, and issues will be run into when installing. However, andarazOroflove.org has released a version of Debian Squeeze with CDE installed on it (called CDEbian), plus a selection of applications. Within a few minutes, I had this installed in a virtual machine, and was trying it out. 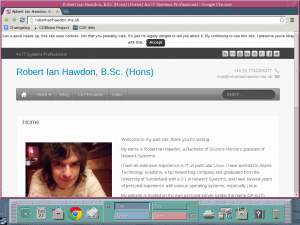 Viewing my site on Google Chrome

It’s very strange using modern applications on an environment that hasn’t really changed much since the mid 1990s, but I can’t complain how fast the system runs with this old interface.

It’ll be interesting to see if CDE will get built upon and see if it will, one day, become a real competitor to the common environments in use today on *nix systems, or if it’ll always be more of a nostalgia item used in a niche market. Only time will tell.