To the music industry: Make file sharing work for you…

So, many people might have noticed recently, that another long time file sharing source has fallen at the hurdles. On October 29th 2010, LimeWire was updated to stop people sending copyrighted material.

This wasn’t totally unexpected, a few years ago, after WinMX was shut down, some people got paranoid that LimeWire would go the same way and, as it was open source, forked the project to create FrostWire. Both applications run on the Gnutella network, but, of course, with the flagship client crippled, the rest of the network has suffered too.

Out of curiosity, I re-installed FrostWire the other day, and tried a simple test by searching “Michael Jackson” into the search box, and the majority of results were, of course, spam. But something I did notice, was the addition of a “Buy Now” button which I don’t remember being there before… 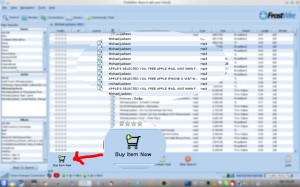 Lots of spam on the Gnutella network, and a buy button on FrostWire

Clicking the buy now button takes you to Amazon with the file name used in the search box, which will allow you to legally buy the song in MP3 format.

Personally, I still miss the days of WinMX, and although there have been patches released to get it online after the RIAA shut it down on the 21st September 2005 (Even OP-EZY released a patch) it never totally got back to being the strong community it once was! But the current patch does filter out most of the junk that was appearing in the final days of the WinMX network! 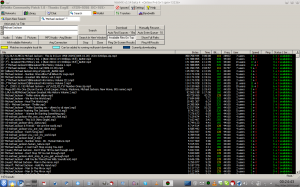 So, what is the future of Peer to Peer? Well, of course, there’s still bit torrent, and the people behind “The Pirate Bay” insist that even though they’re in prison, the site will continue to provide torrents for anyone who want to break some laws! Then, there is still legal usage of Peer to Peer, many Linux developers use bit torrent to release their distributions, as it saves on bandwidth, especially when distributing upto, and over, 4 gigabyte DVD images!

Then there is Vuze, a service that uses the popular bit torrent client Azureus, which allows users to look for legal torrents, for videos in the public domain, or trailers for upcoming films.

If you want to buy music legally online, there are a few options, there is iTunes and Amazon, but sadly, there are limitations using these services. Firstly, you rely on one server when downloading your purchases. Secondly, Amazon still uses MP3s and iTunes only sells their music in AAC format, which not all players can play. Thirdly, an issue that isn’t really a problem anymore, DRM.

DRM should be highlighted, as it has been the cause of much pain for music lovers. How DRM works is that when you buy music (or movies) from a service that uses it, you are given your files in an encrypted form, and the only way to play them back is to have the licence file, which contains the decrypted key. Some services would limit how many computers could have this purchase, and in the case of iTunes, your purchases could only be made portable with an iPod! The biggest problem came, though, when Microsoft was selling music on their MSN Music service. They would sell you music in the WMA format, with a licence file. When this service closed, there was no way you could listen to the music you legally owned, if you happened to either lose the licence file, or migrated to a new computer!

But, what if we could change the way copyrighted music and films are distributed legally, harnessing the power of P2P?

Here is my idea:

WinMX was my favourite system, and seems to have the least spam at the moment, so, lets base this idea on that. Create a new client, we’ll call it “MX – Music eXperience”.

There will then be separate networks on the system, the MX store, MX Indie, and MX Public.

Record companies who support the idea would then put all the tracks they want to be able to sell on to multiple servers, and host on the MX store.

Independent artists, or someone who just wants to get their music available to the public would submit their music to the MX Indie network, where it would be check to make sure it’s unique (i.e. not flagged as copyrighted by the major record labels in the MX Store), and then will be hosted on the MX Indie network. Files here can be free, or paid for, whatever the artist chooses. The MX Indie network will probably be used primarily by record companies wishing to look for new bands to sign, as well as music lovers who want to find something that’s not main stream.

Finally, the MX Public “Grey Market” area, files here are totally free, but a warning will appear before first use to remind people that illegal file sharing is a crime.

So that’s the basics of this new network, now for the innovative part:

Users will set up an account, and have the option to attach some money to it (like a Pay as you Go mobile tariff).

Each track on the MX Store network will be available in any popular format, MP3, AAC, WMA, OGG Vorbis, and most importantly, due to the nature of P2P being a robust network, FLAC, for lossless copies (at a slightly more premium price). All of these files will be free of DRM and/or watermarks, just pure music! The money from each track sold will come from the user’s pre-paid balance.

The MX Indie network will only have formates the artists have provided, but will work on the same principle as the MX Store network.

But now for the cleverest part of my idea: How can we make the illegal part of our new network legal? The answer is simple, adverts! These adverts will be built into the MX client, and NEVER part of a 3rd party application. When the user searches for something on the MX Public network, part of the track is sent to the MX Network to be analysed (in the same way soundhound identifies music played near an iPhone), if the track is identified as copyrighted or as a premium Indie track, an advert will appear in the top of MX Client. The cost of the advertising space will cover the cost of the file that could have been bought in the store.

So, you may be asking, “if I can get the music for free from the public network, why would anyone use the other networks?”. The simple answer is that the public network will be limited to what the user has put there, there no guarantee on the quality of the music that has been downloaded. Because of this, the MX Public network can been seen more as a “try before you buy” system and a place to transfer other kinds of files.

And, of course, the more people who download something (either from the legal part, or the public part), the more copies are available, meaning the network gets stronger!

The MX network will have a chat room facility, just like WinMX did, but this time, everything will be heavily moderated to ensure it’s family friendly, and child lock restrictions are available for “Adult Orientated” rooms.

Of course, this is only a pipe dream, but with the way the music industry is complaining about the amount of internet piracy, and other people complaining of the lack of lossless music available to buy online, this may be a new way of making music easily accessible to anyone who wants it, and best of all, keeping everything on the right side of the law!