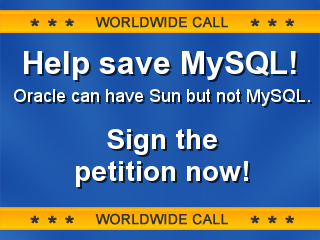 Just a quick message to bring your attention to this campaign. The OP-EZY server, this blog, and many other websites in the world, rely on a piece of software called MySQL. MySQL is a database application (think of it a bit like Microsoft Access) that runs mainly on servers. It’s a back-end system, so most end users who visit a website that uses it, would probably not even know it’s there!

Oracle have their own database system, it is proprietary software, meaning that the code used to make it belongs to them and, in this case, they make people pay to use it (the same way you pay Microsoft to use their proprietary Windows operating system). MySQL on the other hand is Open Source Software (OSS), this means the code is available to be looked at, and improved by anyone in the world, it is also free to use and redistribute (the same way most Linux based operating systems are – to use the same example as before).

Now the problem is, the MySQL project was bought by Sun Microsystems (the company that brings you proprietary software like Java, Star Office and the Solaris operating system, as well as open source software such as Open Office and the open source version of Virtual Box) in late February 2008, and in April 2009, it was announced that Oracle were going to buy our Sun Microsystems.

This brings a rather large issue here, as Oracle are effectively, buying out the competition. In the proprietary software world, the only people that get hit by this is the company who created the product that’s just been bought out. But when the Open Source competition is bought out, this means there is a good chance that Oracle will either make MySQL closed source, or cease production of MySQL entirely!

This petition’s aim is to not let Sun sell MySQL to Oracle, as this would most likely be the end of MySQL. If there is no open source alternative, the cost of running servers go up, and that means more people asking for donations, and more adverts appearing on websites! (At the moment, the adverts on this blog don’t really intrude the rest of the site, but imagine a world where most sites have pop-ups and more ads than content!) Either that, or get Oracle to leave MySQL alone and allow it to continue to be developed!

EDIT: Just before finally posting this, I’ve discovered the takeover has happened, and Oracle own the rights to MySQL, keep signing the petition though, as it is still a possibility that Oracle will leave MySQL alone.

Signing the petition is free, and hopefully will mean MySQL will remain one of the most popular Open Source databasing applications used.