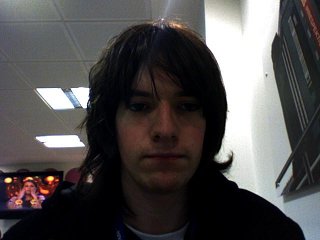 haha, don’t worry, I’m not in a lecture!

The weather outside is terrible… snowing… so I decided to come in early.. things didn’t get off to a good start, I thought to myself as my car spun out of control as I left my street.. “oh well as I’m now facing the other direction, I might as well pick up some stuff I forgot”, it’s a clear sign of insanity when you start telling your dashboard your plans! 😉

So yeah, I had two options, either come in 2 hours early, and attempt to get my laptop to connect to the college network, or sit in a 3 hour traffic jam and be late… I decided the former was probably the better option! It only took about 5 minutes to connect Kubuntu to the college network, which is pretty impressive as their system is expecting Internet Explorer users! Sadly, their wireless connection is more restrictive than their workstations, not even allowing me to SSH back to the server here at OP-EZY to access certain sites (i.e. The Book Of Faces, or PortableApps.com)! Btw, I might go into more information on how to use SSH to get to these sites, but you do need access to a server with SSH installed!

I don’t really have much to talk about, this post is really just to pass the time, I’m sitting in the cafeteria of the college, I would take some pictures, but there are other people around, and I’ll probably get sued for uploading their faces to The Interwebz without signing about a million forms, and paying some kind of royalties, so you’ll have to make do with my ugly mug!:

Yes, I do have to suffer ITV’s finest cheap TV! Hooray for Golden Balls… could be worse, they could be opening random boxes with no skill involved.. also there seem to be a bunch of girls in here trying to cover Donny Osmond’s Puppy Love… they aren’t the worst singers in the world, but they’re only singing the first line… gets a little annoying after the 20th time!

On the plus side, the staff at the cafeteria seem to be in the Christmas mood and are giving stuff away for free! Coffee and a Sandwitch: £0.00 …. sweeeeeet!

Right, I can’t really think of anything more to say at the moment… so I think I’ll bring this post to a close.. my lecture starts in about 40 mins, so I have nicely killed some time doing this 🙂