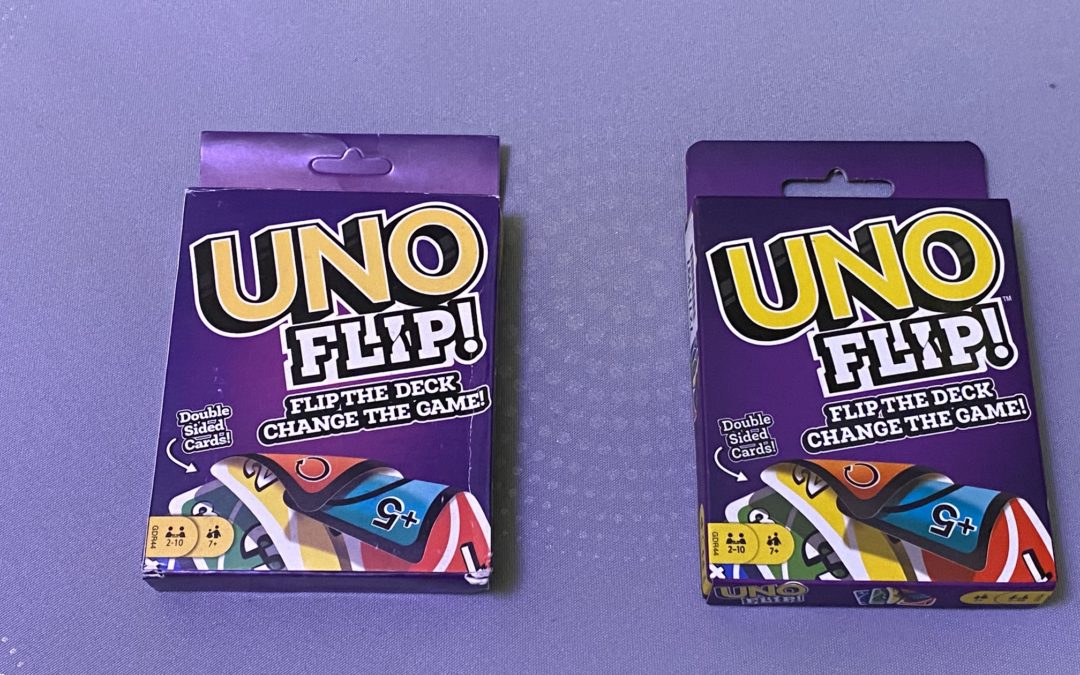 So, me and my fiancée have a little obsession, it’s a little card game you may have heard of called Uno.

Yep, you know the one, a colourful combination of Yellow, Red, Blue, and Green cards with a few wild cards and numbers. You’ve probably played it before. We play this so much that we believe that the game can cause more family arguments than Monopoly.

That being said, we were both quite excited when a relative suggested we try a new Uno game that’s recently hit the market called Uno Flip. The game features major twist by having a light side and a dark side. The light side plays mostly like the original Uno game, whilst the dark side has a much more punishing set of rules.

So, we quickly ordered a set, and when it arrived, something didn’t seem right. After playing a few games we came to the conclusion that the deck we received was counterfeit. After ordering another deck from a high-street retailer, our suspicions were confirmed. So I’m going to use our experience to show how to spot a real deck from a counterfeit one.

On the left we have the counterfeit, compared to the real deal on the right. We can see the box is not as vibrant. However, the box is the best bit that’s been replicated here as we will see further on. However, if you want a more subtle clue as to if you’re looking at a genuine box or not when you see one in the store, check the UNO logo.

The counterfeit deck has been edited to remove the trademark symbol. This is a theme that carries on through the deck. I’m not sure if this is a tactic to keep the trademark owners, Mattel, from suing, or if it’s something the counterfeit manufacturer has done as a nudge to inform you this isn’t a genuine deck.

On the back, there are a couple of differences. Firstly, the Mattel Games logo in the top left is missing from the fake set. Also, once again, the ™ symbol is missing from the UNO logo. On this occasion, I have not been able to spot any spelling mistakes. However, in the small print at the bottom, the registered (®) and trademark (™) symbols are missing (though, the copyright (©) symbol is intact). Another thing missing on the fake is the link to Mattel’s support site: service.mattel.com. They have also inexplicably flipped the 2-10 players and age 7+ icons on the top right-hand corner of the box.

So, off the bat, this game as new rules, so the first thing you’d look for is the instructions. However, the counterfeit version appears to be missing these. This doesn’t seem to be unique to my particular counterfeit with one reviewer on Amazon, who’s name is Laura, stating:

FAKE! Rubbish quality.
These are fake and not even a good fake. The quality is appalling. Card is thin and picture isn’t printed straight. No instructions in the box. Really disappointing. If you’ve played with genuine Uno cards you will know the difference straight away. Hoping to get a refund.

I have taken a picture of some of the worst cards in the deck compared to their genuine counterparts:

Here we can really see the inconsistencies: I have two examples of the dark side, teal and orange, as well as a red and yellow card from the light side. On the top you can see how the counterfeit cards have different shades in the same colour, especially in the teal suit. As I am colourblind, this makes it even more difficult to distinguish the cards – I can just about tell the difference on the real deck. Also, there are lots of black marks on the dark side. A common print error I’ve seen on the fakes, that seems to appear on Amazon reviews, is one of the yellow 3 cards. I’ve nicknamed this one “The Three of Shame” where there’s a large splodge of missing ink at the top of the card.

Looking at the cards more closely, once again, the ™ symbol is missing from the Uno Flip logo, and missing the “© Mattel” tag in the black border of the dark side of the cards. The cards are also ever so slightly smaller on the counterfeit deck as well as feeling thinner.

It’s not all bad news for our counterfeit copy, it’s been relegated to the “spare deck” status for taking on holiday, or to places where it’s not the end of the world if they were to get damaged. However, it’s worth spending the extra time to ensure you are getting the real deal. I find the online shops are a bit hit and miss with their inventory, whereas the good old bricks and mortar stores are generally a safer bet.