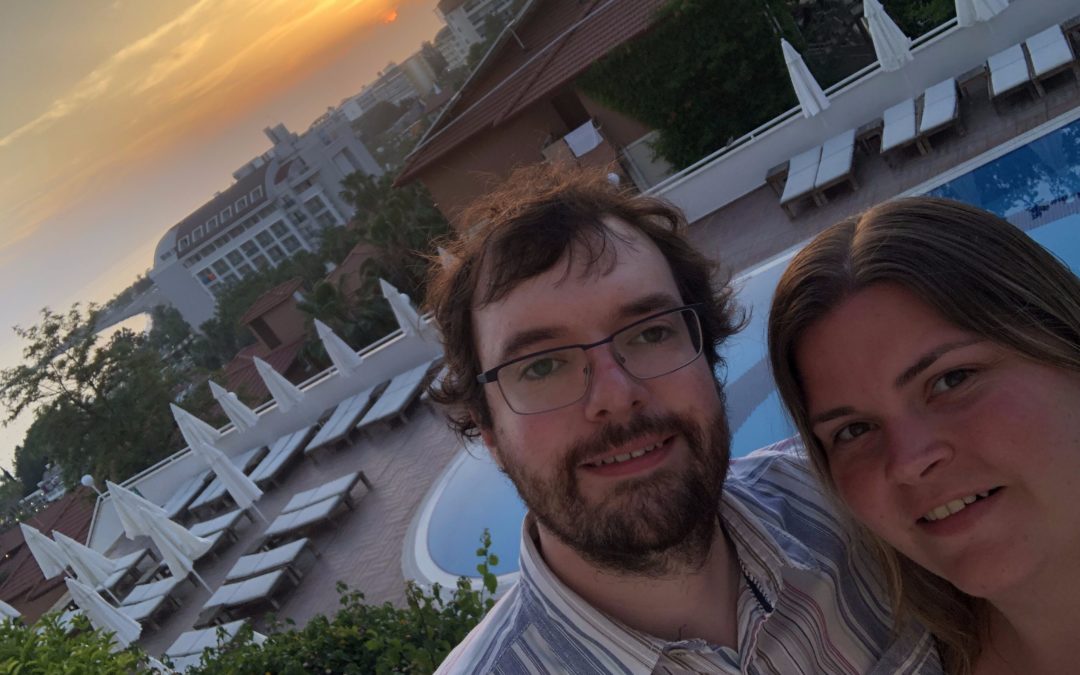 I recently returned from a holiday with my girlfriend and her family in Turkey. This was a package holiday from Jet2Holidays, where we stayed at the Laguna Beach Resort & Spa, Okurcalar, Alanya.

We started our holiday from Newcastle International Airport where, after a 4 ½ hour flight, we landed at Antalya, this was then followed by another hour and half journey by road to the resort. We arrived after midnight, so not only was it dark, but only the reception was open.

The next morning, we awoke to see this view from our resort overlooking the Mediterranean Sea. But there was no time to admire the view, as I was starving, and it was time for breakfast.

As with most holiday resorts, the food was provided in a buffet style. As the hotel generally caters for guest from four regions – British, German, Russian, and Turkish – there is a wide range of foods to choose from. Being the adventurous type, I generally picked foods I normally wouldn’t have at home. Of course, anyone who knows me personally knows how much I love Turkish delight (Lokum), well, you’ll be glad to know that there was some available at breakfast every day.

After breakfast, we started exploring the grounds of the resort. We were met by a member of staff who took us on a quick tour and eventually lead us to the resort’s Spa. Here we were shown the Turkish bath and then explained the pricing options. We were advised if we wanted one to do it early in the holiday as it can be very painful if you have any sunburn.

The Spa was very enjoyable, where we weren’t only given the Turkish bath treatment, but also spent time in the sauna, had face masks applied, and given a rather extensive hot rock massage. This left us feeling relaxed ready to enjoy the rest of our holiday.

On the second day, we decided to head down to the beach at the resort. The beach is split into sections for each hotel. There was a bar down there as well as the hotel provided sun loungers. An area within the sea had been cordoned off for people to swim in to keep separate from the other activities which involved speed boats.

For an additional fee, you could take advantage of the other activities that weren’t provided by the hotel. We had a go on the Banana boat which must have lasted about 20 minutes for a very reasonable price of 50 lira ahead.

As a side note: In terms of money, the Turkish will tend to accept any currency. They like you to spend the Turkish Currency – Lira – but will happily take Euros, Pound Sterling, Rubles, and US Dollars. They tend to wait until they get a good exchange rate.

The next day, we decided to go on an excursion organised by Jet2Holidays to view some of the sites in nearby Manavgat. Here we got to see the Manavgat waterfall, took a boat trip up the Manavgat River, and visited the Central Mosque complex.

The final part of the excursion was a visit to the outdoor markets – one of many markets we’d visit over the course of the week. We were advised by the tour guide to only go to the stalls with prices printed as British people, generally, aren’t good at haggling. However, I managed to get far better deals with haggling and discovered that the key to getting a good price was simply a mixture of banter and persistence. At the end of the day, no matter how low you manage to get the price down, the trader is going to be turning a profit, and they’re going to push for that sale.

At the hotel that evening, it was Turkish night, where more traditional Turkish foods were served, as well as a show put on to promote it.

The majority of the time we spent was at the resort, enjoying the pool, the water slides, the beach, and, of course, the open bar. The animations team would put on events at the resort to keep the guests occupied. This included fun games including darts, a couples dancing competition, as well as many pool-based games. In the evening they’d also put on some entertainment, starting with kids music, followed by professional dancing, usually finishing up with entertainment geared towards the adults.

Of course, we were free to go exploring outside of the hotel, so we took a trip to the ancient city of Side. This was partly because all the souvenir shops in the area mentioned the place, so we felt this must be a good tourist spot.

It was very interesting to see the remains of the ancient city, however, a large part of the site appeared to be a collection of miscellaneous building blocks that didn’t appear to belong to anything still standing. They were neatly laid out however, so it’s not impossible that there may be plans to reconstruct more parts of the city with them.

Whilst in Side, I did get to try a Turkish coffee. I would go as far as saying this is an absolute must to try if you’re a coffee fan. It is served in an espresso sized cup. It wasn’t as strong as I assumed it would be, but was infused with coca and vanilla. I would certainly have it again.

The rest of the trip was mostly spent at the hotel and visiting the local markets. One of the downsides to the Alanya area of Turkey is that whilst there’s a lot of hotels, there aren’t many local tourist spots in the area. This certainly shouldn’t be a deal breaker, however, as this is sold as an all-inclusive holiday so you should be able to find something to do every day within the hotel’s grounds, or at the beach.

The staff at the hotel were very friendly and always tried to engage with the guests even if, in some cases, their knowledge of the guests’ language was limited. This was the case for one of the waiters, Piro. He used his actions to interact with guests, a language that’s universal but ensured we’d remember and look out for him at dinner time.

The only gripe I really have with the whole experience involved the animation team. During the week, one of the team members would go around selling tickets for a disco a couple of nights of the week. Select members of the animation team would come along – we believe this was a way to get the guests to pay for their nights out, not that I have anything against that, in fact, that’s actually quite smart.

However, on this occasion, what we paid for wasn’t what we got. After leaving the hotel 45 minutes late, we ended up at a different venue, which was nightclub. To add insult to injury, the animation team representative said we’d be back at the hotel at 03:30, an hour and a half later than we had originally been told. The worst part was the team member who sold the tickets tried to sell a ticket to one of our party who was underage. This may have been acceptable at the advertised venue, but not the one we ended up going to. We ended up forking out for a taxi to get us back to the hotel early.

The next day, after putting in a complaint, we were able to talk to the head of animations and managed to get our money back for the tickets. (we didn’t push for the taxi money as it was our choice to leave) To remain impartial, the head of animations did say the change of venue had been announced throughout the day at the hotel, however as we had been on an excursion, we missed the prior announcements.

The last day was spent at the resort, soaking up the last of the sun, getting packed and ensuring we hadn’t left anything behind. It was soon time for the hour and a half journey back to Antalya to catch the flight home, a shock to the system returning to Newcastle with the 20°C drop in temperature.

Overall, I’d recommend the resort, I believe a week is just about the right amount of time to spend there due to the lack of tourist attractions nearby. We didn’t let the incident with the disco ruin our holiday. As a whole, I’d definitely like to visit Turkey again, but maybe in an area with more tourist attractions.