[Updated] Your favourite YouTube stars may soon dissappear from the platform, but not before your account goes first

Ah, who doesn’t love a bit of YouTube drama? Whilst I’ve tried my best to stay out of it (mainly by being a total nobody on the platform), I think what happened to my account is the start of something that’s going to spiral out of control.

It started in the late hours of the 1st July. I received an email from YouTube saying one of my videos had been taken down due to a Copyright Infringement takedown request. 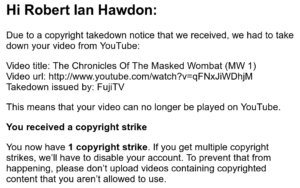 Now, when this came through, I didn’t think too much about it. I knew there were some copyrighted, fairly used, audio clips in that video. So I figured that I’d just put a claim for fair use in after work the next day, or come to some sort of agreement with FujiTV.

Unfortunately, I didn’t have the chance to do this. When I went to YouTube after work, I noticed I seemed to have been signed out. I’d been having issues with Google services at work, so I assumed my personal account had logged out as well. But, upon signing in, I was greeted with the following message:

Unable to access a Google product. The most unhelpful screen you get when you’re blocked from accessing a service.

Currently, I now appear to be without my YouTube account. An account I’ve had since 2006, but with no explanation why. I decided to check my email to see if I had had any more correspondence with YouTube. This is what was waiting for me:

My inbox showing a large number of takedown notices all in the space of an hour.

12 additional takedown notices in the space of roughly an hour. It started me thinking, had FujiTV decided I was infringing on a lot of their copyrights? Upon opening the emails, things started getting weird. Each takedown was initiated by, what claimed to be, different people. Many of the videos target, 100% did not contain any copyrighted material. Below is a screenshot from one of the takedown emails.

Things to note about some of the videos listed in that email:

Bad weather – Literally a video of heavy rainfall out of my bedroom window. No background music, 100% original content.
Playing with fire – A video of me lighting a candle, blowing it out, and relighting it – in slow motion – by using the smoke from the candle.
Fireworks Heaton – Fireworks in Heaton, where I lived during University, in 2011.
Being naughty in the apple store – A video of me, jailbreaking Apple devices in the apple store a few years ago.

I also noticed a pattern. Once your account is blocked, YouTube releases the Emails and names of the users who requested your video be taken down, as you can no longer contact them via YouTube itself. Each of the email addresses were GMail addresses starting with a name, and followed by either 3, 4 or 5 numbers. They also seemed to have nothing to do with the supposed companies making the claims.

In this section, I’m going to list all my taken down videos, a link to the blocked content (at the time of writing), the name of the person attached to the claim, and the supposed company they’re masquerading as:

Note that a lot of these claims came, supposedly, from Japanese companies, from people with very western sounding names. Something doesn’t quite add up here.

A storm is brewing

So, my theory so far is that this is an automated bot that’s gone through all my videos and submitted copyright claims to shut my channel down. By why target me? My channel isn’t big, it’s not a being monetised, I don’t have a Patreon account. I don’t depend on my account to earn a living.

I believe this to be a test. Go for the lowest of low hanging fruit. Who cares if a nobody’s account is shut down? As one user on Reddit said:

I thought Google would have something in place to prevent this. Otherwise why aren’t all of Pewdiepie or Logan Paul’s videos taken down like this? Just imagine all the troll who would do that!

And that’s the thing, the process for taking down a video from a small channel is the same for a large one. Whoever did this may have been testing the waters with the plan to take down much larger accounts. Anyone who’s dealt with the admin side of YouTube in the past knows the counterclaiming process is anything but smooth, especially if your account is closed.

For me, I had to email the copyright department of YouTube with a list of videos I wanted to counterclaim. Once the process kicks off, the user who actioned the takedown is contacted and given 30 days to respond. In theory, if they don’t respond, the takedown is reversed.

As I assume these are all fake accounts, I have a feeling no-ones going to be responding and I’m going to have to wait out the next 30 days. Even if they do respond, I doubt they’ll be able to prove they’re the copyright holders of any of the content, even the clips I have used under fair use in some videos.

Shelter from the storm

In the meantime, I’ve set up another account, and I’m slowly resubscribing to the channels I frequently watched. My new account is totally immune to this kind of attack, however, but only on a technicality that there aren’t any videos on there to claim copyright over. The problem is, YouTube is built on content, and if everyone stops uploading their content in fear of this kind of attack, the whole ecosystem collapses.

But what about my old account? At the moment, it hangs in limbo. I have contacted YouTube’s copyright department to attempt to get this sorted. I will post updates on here when I get them. I have also posted on the YouTube SubReddit in hopes someone at YouTube might see before it becomes a big issue.

Apart from that, there’s not much else I can do. It’s now time to play the waiting game.

If anyone else has had this happen to them, I’d be interested to hear your comments. How long did it take to get resolved? Did it even get resolved?

We have determined that the copyright takedown requests we received for these URLs was invalid. Your copyright strikes have been resolved.

Whilst many may complain about YouTube’s stance of “guilty until proven innocent”, unfortunately, they have to follow the law. If this process is ever to change, the DMCA (Digital Millenium Copyright Act) needs to change. Personally, I’m impressed with the turnaround time in getting this issue resolved. I’m hoping larger, more established, channels the owners rely on for a living, aren’t hit by this kind of attack.