A look back at the Ubuntu Phone 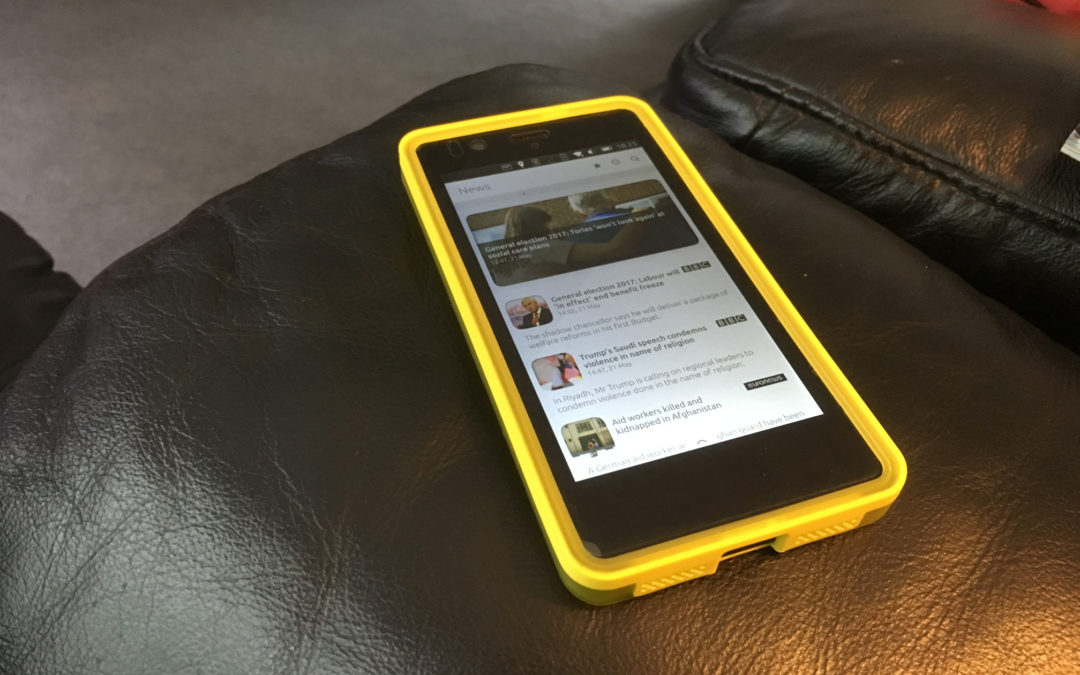 About 5 years ago, I read an article on Canonical’s ambitious plans on achieving device convergence with a product called Ubuntu for Android. That is to use the same code across different types of devices and allowing different devices running the same software integrate with each other. Whilst macOS users with iPhones have been enjoying this type of functionality since OSX Yosemite was released in 2015, at the time this was quite a new concept. The Ubuntu for Andriod project didn’t last long, with Canonical shifting their focus on building a complete alternative to Android called Ubuntu Touch, which was started around the same time. In early April 2017, Mark Shuttleworth announced that Canonical was discontinuing the product. So I decided to dig out my Ubuntu phone as I never got around to reviewing it at the time.

Initially, Ubuntu Touch was only available for existing Android devices such as the Google Nexus, being an iPhone guy, I didn’t own one of these devices, and I wasn’t planning on buying one to try out Ubuntu Touch, but in late 2014 the first phone to ship with Ubuntu Touch was announced, the BQ Aquaris E4.5 Ubuntu Edition. This was available to purchase in Europe in early 2015. Despite orders being strictly limited, I was able to purchase one on their flash sales. 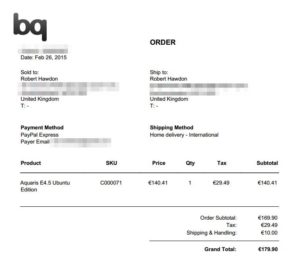 The phone itself was quite a low-end device even for its day, but it was a perfect, affordable, product to showcase the development of Ubuntu Touch. My Aquaris E4.5 along side my laptop running Ubuntu 14.10 at the time.

After a few weeks, my order finally came through, and understandably, I was quite excited to see what this new mobile system could do. 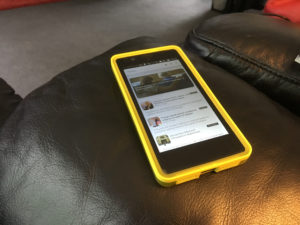 The phone, in a protective silicone case, powered on and unlocked.

Ubuntu Touch revolved around the idea of using scopes rather than traditional apps for getting users to retrieve their information. When the phone is unlocked, instead of being greeted with a list of apps installed on the device, as is common with iOS and Android, you see your default scope. Out of the factory, this is the news scope, which you can customize to pull from a wide range of news sources. Swiping from the bottom allows you to chose which scopes are displayed, and which order. The news scope shown when the device is unlocked.

Swiping left or right at this screen (but not right from the edge) will cycle through the various scopes you have configured, scopes can built for various purposes, including messages, phone calls, YouTube, photos, and, of course, a page for more traditional apps. Swiping from the left of the screen brings up the Unity bar, a feature users of the Ubuntu desktop will be familiar with. Here you can place your favourite apps for quick and easy access. Of course, Ubuntu Touch’s interface is based on, what was to be, the upcoming Unity 8 interface so the layout and appearance of the bar is a little different. 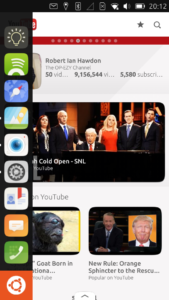 The Unity bar allowing easy launch of your favourite apps. Swiping down from the top of the screen gives you access to the indicator and notification menu where you can see unread notifications as well as toggle some of the phone’s settings quickly, this is accessible when the phone is locked too which is great for enabling settings such as Flight Mode (Airplane Mode). As for actual apps on this platform, they do exist too. From utilities to access music streaming services such as Spotify (Premium account required) to games, the Ubuntu phone app store was the place to go. Some of the applications left a lot to be desired, but this was to be expected from a new platform. Some applications, as well as games, were actually quite well polished. Cut the Rope by ZeptoLab on the Ubuntu phone

As I mentioned earlier, I ordered the first commercially available phone with the Ubuntu Touch operating system: The BQ Aquaris E4.5. This was quite a low budget phone to start with, but was a perfect candidate to try out the Ubuntu system as it was cheap enough to be accessible to a lot of people, but powerful enough to actually be able to perform day to day operations on.

I took a couple of pictures using the camera: 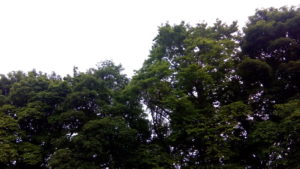 An indoor shot of an album playing on my turntable

The photos aren’t of the greatest quality, but entirely respectable when taking into consideration the fact that this was a budget phone. It demonstrates how the camera works on Ubuntu Touch. (side note: the album in question on the turntable is Souvenirs, by Dan Fogelberg) The camera app has a few different functions. I accidentally adjusted the volume when taking this screenshot

The stock camera app allows you to change some basic settings such as when the flash will go off, HDR photos, and setting a timer to allow for a delay when taking photos. Plugging the phone into a computer will show the files stored on the device for easy file transfer. I haven’t personally tried this on anything other than Linux.

So what’s the future for Ubuntu Touch? I personally really liked the concept, though I wasn’t ready to switch from iOS before Mark Shuttleworth’s shock announcement of the termination of the project, along with MIR and Unity 8. But is all hope lost? Thankfully not. The open source nature of Ubuntu Touch means that the project has quickly shifted to an independent development team, UBports. I have yet to update my phone to use their builds, but will probably do so in the future.

I personally hope development continues in one way or another. I do like the Ubuntu Touch concept, and I can imagine it performing quite well on mid-range phones. Maybe this is still one system to keep an eye on.