2016 is a pretty special year for me. It marks 10 years since switching my default operating system to Linux from Windows. (With a small exception in 2007 when I bought a Mac and used OS X for a while before installing OpenSUSE on that too) For me, Linux based systems do exactly what I need. They’re stable, fast, and, of course, have a very attractive price tag. But yet the market share of Linux desktop systems is still a measly 1%. I’m going to explore why this is the case, and hopefully debunk some myths along the way. 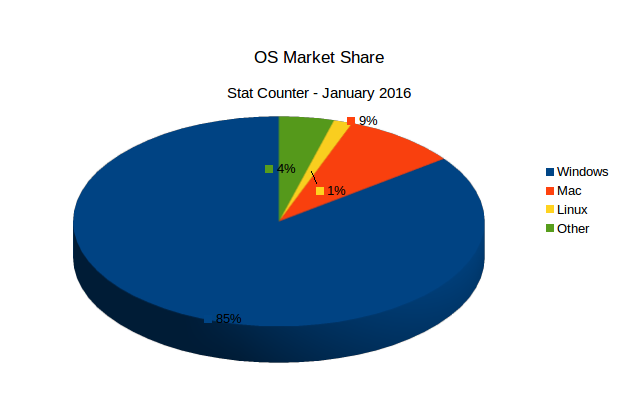 It’s no surprise that Microsoft Windows still has a large grip on the computer operating system market share, with the majority of PCs shipping with the system out of the box, Microsoft’s deal with computer manufactures has certainly made Windows a household name and a first choice with users and developers alike.

Of course, I prefer to support the underdog so to speak, and this post is about Linux, more specifically, Linux on the desktop (which includes laptop and notebook machines), and the reasons why I think it still holds such a small share of the market.

Fact: Windows is just so convenient

Windows comes bundled with many systems, most user don’t bother taking the time to try a different operating system because it’s what they’re used to, or they lack the technical know how to try anything else. It’s also likely that anyone raised between 1985 to the present day would have grown up with Windows (unless, of course, you were a Mac family).

Myth: It’s difficult to use

This is such an outdated misconception. I started to look at using Linux myself since 2002, and back then, yes, things were a little more difficult, with simple functions like getting a sound card working, and DVD playback requiring a whole afternoon dedicated to reading forums and compiling code. But even then, the misconception that you needed to know someone who knew Linux was becoming outdated. The internet was more accessible and any problems you ran into, you could be sure someone else had come across them before. 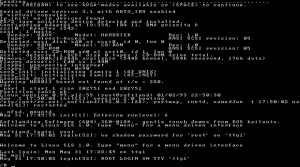 It is true that in its early days Linux systems were a lot more difficult to use. A few months ago I attempted to install, what’s considered, the first ever Linux distribution – Softlanding Linux System (SLS). Even with years of Linux knowledge, getting this to install in a virtual machine was a challenge.

These days though, things have come a lot further, with most Linux distributions spending years perfecting the out-of-the-box-experience where everything just works on first boot.

Yes, choices, so many choices. Whilst choice can be seen as a good thing, it often confuses many newcomers to Linux. Sadly there’s no definitive answer to what you should choose. I would recommend choosing a well maintained project such as Ubuntu, Mint, Fedora, or OpenSUSE. Their large user bases will help you get support should you need it. They also offer live bootable images which allow you to try it out before committing it to a space on your hard drive, or even a virtual machine. (When I started, these options weren’t available – now I’m showing my age!)

Ok, there’s only one of my mates who actually still believes this. But for the record, here’s a screenshot of my Ubuntu system without a terminal in sight: 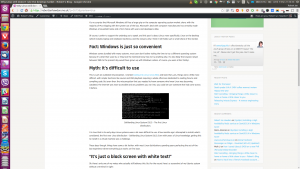 A screenshot of my Linux system sporting a GUI, previewing this post using the Google Chrome browser.

Of course, what my friend was referring to was the terminal, and it’s no secret that the terminal on pretty much any Unix like system is a very powerful tool, and is still commonly used by power users. 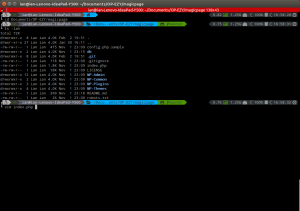 Even the terminal isn’t restricted to a black and white window, with alternative shells (such as zsh) allowing for modules for customisation to make life easier when working in the terminal itself. In my screenshot above, zsh knows when I’ve entered a git repository and gives me useful information about it.

The fact the terminal is often used a lot on Linux systems is probably a reason why many people are scared away from it, but as mentioned before, it’s used more by power users. Though, in my opinion, learning how to do anything at the command line is always a good skill to have.

As a side note, I have a very similar terminal setup on my Mac at work: 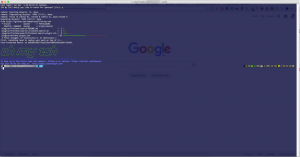 A Terminal is not just for Linux 🙂

“There’s no software/games for Linux”

This is probably something I’ve heard a lot when I mention Linux to other people. And yes, whilst a lot of popular software (such as Microsoft Office, Adobe Photoshop, etc) isn’t available naively, alternatives are available. It’s also possible to run these through an application layer like WINE. 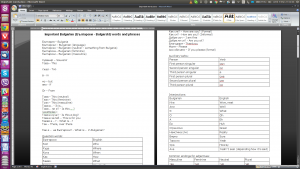 (“Здравейте” to my Bulgarian readers  🙂 )

A lot of other popular software, often open source but not all, is available readily for Linux systems, and most distributions even allow you to easily install them from a central software repository. 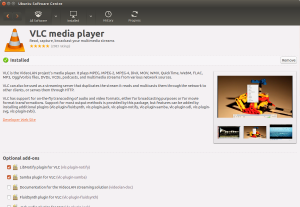 As for gaming, a lot of games companies are beginning to tap into the Linux market. The Humble Bundle for years has been distributing games for the three major platforms on a Pay What You Want basis, and often Linux users pay more for the games than their Windows and OS X peers.

It’s not just independent game developers. Big names are beginning to develop for Linux too. 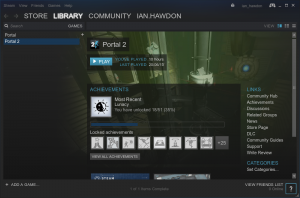 I believe the main reason Linux systems aren’t as popular on desktop systems is generally down to misconceptions. Each year we hear people say “oh, this year will be the year of the Linux desktop”, but this won’t happen until the myths and outdated views above are addressed.