My first week with the Apple Watch 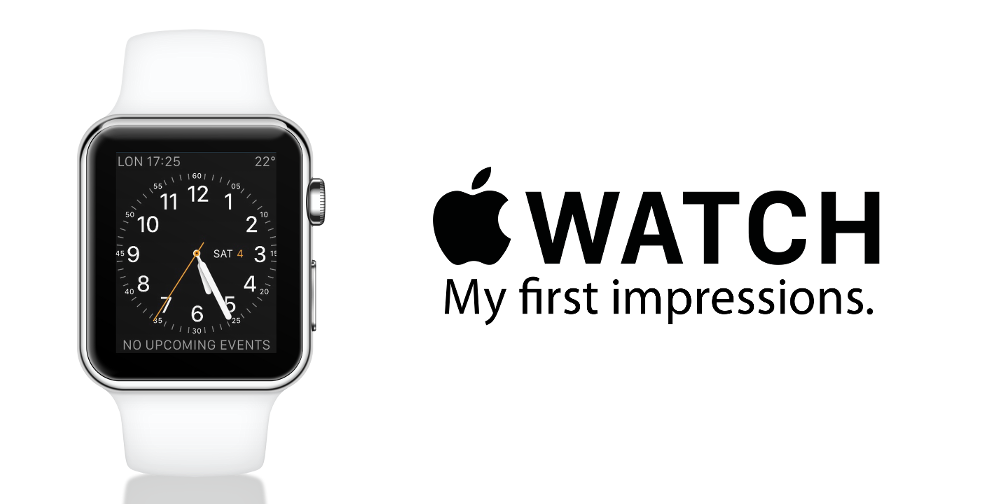 …and why the £12,000 top of the range model might actually not be such a bad investment.

Ok, so I finally took the plunge last week, raided the piggy bank, and purchased an Apple Watch. Why? Simply put, I liked the idea of having important information piped directly to my wrist. Lazy? Maybe, but the watch has actually helped me start becoming more proactive, and getting more exercise.

So, for those who might not yet know, Apple released the Apple Watch in April and acts as an extension to any iPhone 5 or later. I personally decided to wait until the hype had died down a bit before going to the Apple shop to purchase one myself, and whilst I’m still not totally sure if it’s something I couldn’t not live without (sorry for the double negative), the upcoming watchOS 2 update, and the promise of more Apps to integrate with could.

But on to the watch itself. 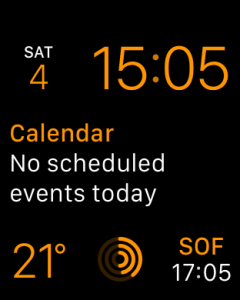 The modular clock face I’m currently using on the watch.

Currently, I’m using the modular face as I find it shows all the information I need. Date and time at the top, below that, my calendar, which mainly comprises of my work events. This lets me see, at a glance, when my next meeting is, and will remind me 10 minutes before it’s about to start. Across the bottom, I have 3 modules showing the temperature in the local area, my fitness activity, and a world clock showing the current time in Sofia, Bulgaria – which is where our overseas office is located. Tapping on any of these modules will open the app associated with it. 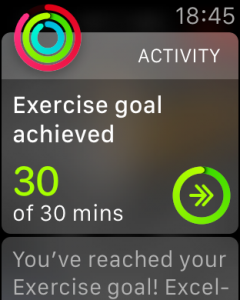 The watch notifying me of an exercise goal being reached.

Of course, one of the major features of this device is its activity tracking capabilities, and within the first few days I realised how lazy I actually am normally. The watch is now reminding me to do more exercise, and to stand up at least once every hour. Above is the message that pops up during a half hour walk to signify that that day’s goal is complete. 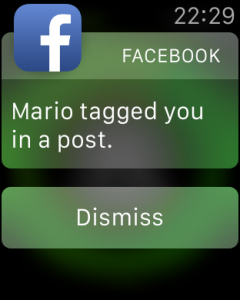 A Facebook notification with no option to act on it

One of the many useful features is that the watch can mirror notifications on your phone, though it’s best advised to only enable notifications from apps you actually care about. Unfortunately, not all apps have watch support, for example, Facebook’s notifications will be sent to the watch, but you aren’t able to interact with it, meaning you have to consult your phone to see what the notification relates to. 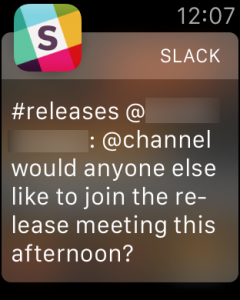 The same issue occurs with other apps

The same issue occurs with other apps, this is down to the lack of apps which currently support the watch. Obviously, once more developers start working on the watch, we’ll start to see the ability to interact with more apps from the comfort of your wrist. On the other hand, being able to see, at a glance, important notifications is still useful. For example, above, there is a screenshot from the Slack chat service we use at work. Being able to check for important business critical message whilst in a meeting without causing disruption is very useful.

Other useful features are:

Sadly, I haven’t been able to test Apple Pay yet, as it isn’t to be launched in the UK until 14th July, but it’s a function I’m looking forward to using.

So, that’s a quick overview of the watch, I’m sure many more features will be added to it in updates. Of course, I mentioned at the beginning that the purchasing one of the top of the range ones might not be a bad investment. Why? Well from a technological aspect, the Apple Watch Edition is a terrible choice, as the bottom of the range device can do exactly the same function as the top of the range one (which is a whopping £11,661 price difference when comparing the 42mm models). But in terms of keeping its value? Well, if we’re talking about the functions of the watch, its value will depreciate fairly sharply when the next model is released, but I’m betting that as little as 5 years down the line, a mint condition, working, first generation Apple Watch Edition would sell for a fairly high price to a collector.

Anyways, to wrap this up, I quite like the Apple Watch and pleased with my purchase, though I’m sure there’s plenty of things I’ve missed in this review. What’s your opinion on it, or other smart watches in general? Comments, as always, below.