Windows XP: The End of the Road

I had originally aimed to get this out before April 8th, but due to work commitments and illness I was unable to. So instead, I’ve changed the purpose slightly.

Well, the 8th of April has been and gone, and for a few this means it’s time we should say goodbye to an old friend: Windows XP.

A while ago, I posted about Dell ceasing to preinstall Windows XP on their computers as Microsoft would not allow such practices after 22nd October 2010.

The question is, 13 years after its release, who is still using Windows XP? Well, below is a chart for the market share of desktop operating systems only last month (March 2014):

Believe it or not, Windows XP still has almost 28% of the global market share of desktop (and laptop/notebook) computers, that’s over a quarter, this is actually quite worrying.

Security experts are always saying that for a system to remain secure, it needs to be updated regularly. With support ceased for this system, this is impossible. But what are the solutions?

The obvious solution is to go out and buy a new PC, but for some this is impractical. Either they can’t afford one, think the transition from Windows XP to 8.1 would be too much of a change, or simply don’t want to get rid of a perfectly working machine.

In the case of the latter, it may be possible to upgrade your PC to a newer version of Windows (such as Windows 7), or switch to a light weight Linux distribution such as Lubuntu.

But what about those who decide to stick with Windows XP against the advice of security experts? Well, developers will see the end of extended support as the cue to stop supporting the aged system in their programs.

For example, some websites that use an extension of the TLS protocol called Sever Name Indication (SNI). When attempting to visit one of those sites on Windows XP using Internet Explorer 8 (the last version released for that browser) a screen similar to the following appears: 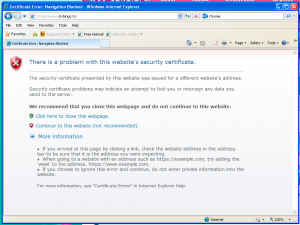 This can easily be resolved by moving away from Internet Explorer 8 (which is highly recommended if you’re using any pre version 9 versions anyway) and switching to another browser such as Mozilla Firefox or Google Chrome.

So now Windows XP is no longer being developed, I’d personally recommend making an installation CD with all the updates applied (dubbing it something like “Windows XP Final”). To do this, you’ll want to copy the contents of your installation CD to a folder. Download any service packs yet to be applied (in my case, I was using an RTM CD, so I needed to download all three service packs*) then head over to http://xdot.tk/ to download a script that would fetch all updates since Service Pack 3. From here, you can use software like nLite to slipstream these into your installation media. 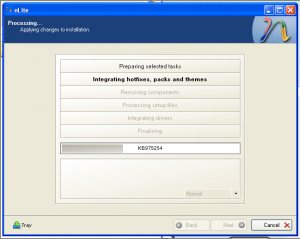 Patching my Windows XP installation media with all updates.

Windows XP has had one hell of a run, but what caused it to be so popular for so long? My theory is, where most versions of Windows have a 2 or 3 year cycle before the next version’s release, XP was the “current” version for 6 years. That, paired with the general dislike for Windows Vista and the higher system requirements, and not forgetting the global recession in 2008, I believe all contribute to XP’s long reign in the Personal Computer market share.

The question is, how many of my readers are still using Windows XP? According to Google Analytics, 8.14% of Windows users were using XP this month alone. So, if you’re one of these people, why are you still using the 13 year old Operating System? Answers in the comments please.