The BBC to axe BBC Three as a broadcast channel – a terrible idea. 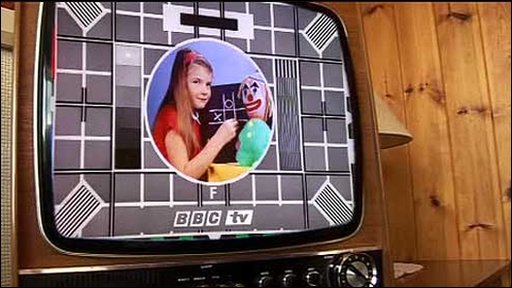 So the BBC have recently announced they are planning to axe their 3rd channel, BBC Three, on Digital Satellite and Terrestrial platforms in the Autumn of 2015 and making it an online only service. This blogger’s opinion: Worst idea to date!

BBC Three is actually no stranger when it comes to being an online only TV Channel. On 23rd September 1998, the channel launched under the name BBC Choice and was the first station the BBC launched intending to be a Digital only channel and not available on standard Analogue receivers of the day. At its launch, Sky Digital was still a week away from launching, and the Terrestrial alternative, On Digital, was still over a month away, so BBC Choice was only available via an online stream. As the majority of the UK was still using dial-up internet, not many people saw the launch.

The former BBC Choice logo used before the service was renamed.

On 9th February 2003, BBC Choice was renamed to BBC Three, its target audience is aimed at teens and young adults. In late mid December 2013, the channel was upgraded to High Definition.

The idea of axing the channel’s on-air status has reported to have come about as the BBC are trying to cut £100m from their yearly budget and that because the young audience BBC Three is aimed towards are more likely to use online streaming services, that it would make sense to move the service there. The problem with this is that not everyone can afford the privilege of high speed internet connectivity (needed for streaming an HD service) or, worse still, are unable to even get a fast enough service to do so in the first place. The service will still be paid for through licence payers’ money, which many will see as a total waste if they’re unable to even receive the service they’re paying for.

Some say the BBC could easily cut costs by other means, for example, lowering the pay of some of the higher paid presenters, merging the childrens’ channels (CBeebies and CBBC), axing/moving BBC Parliament, or even raising the licence fee a little. (Though that last point might not be so popular!)

I think it’s just a little bit silly that the BBC spent the time and money upgrading the service to HD only to think about axing the service months later. Many people will be sad to see the channel leave the airwaves, should the plans go ahead, as the station was responsible for bringing the British public award winning TV shows such as Little Britain, Russell Howard’s Good News, Two Pints of Lager and a Packet of Crisps, Gavin & Stacey, and Torchwood.

There is currently a petition going round calling the BBC Trust to save BBC Three, this currently has over 112,000 signatures at the time of writing. 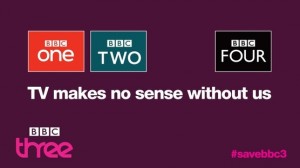 The image used by the Save BBC campaign