Recently, I have seen a lot of people reposting messages on Facebook usually along the lines of “We have thousands of unsealed iPad Mini’s that can’t be sold so we’re giving them away for free!”. Users are told all they have to do is share and like the page to be in with a chance of winning. But is there something more sinister hiding being the like button? 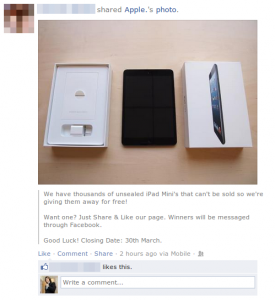 So lets firstly have a look at the initial “hook” as it were.

The real eye catcher here is the photo of an iPad mini being unboxed. Presumably making the user believe it was taken by the owners of the Facebook page in question (in this case, the page is called “Apple.”)

When the user sees this, they’ll then be drawn to the text underneath which instructs them to like the page and share it.

Now lets have a look at the page “promoting” this: 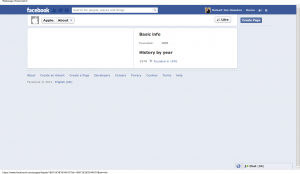 The rather sparse about page on the rouge Apple Facebook page

The about section on this page has hardly any information on it. A company as large as Apple would most likely have employed someone specifically to maintain their social media content. The other issue I have with this Apple page is that the only post on it is the current “promotion”. Surely Apple would have a lot more to say on their own Facebook page.

So, what’s going on here?

Well, obviously, there’s absolutely no way Apple just happened to end up with “thousands” of “unsealed” products, and if they did, they’d certainly be asking questions, and not just giving them away to Joe Public.

My best guess is that there are many people out there who’ll happily pay to buy a page on Facebook pre-loaded with likes with the intention of spamming these users. Facebook pages can be renamed, and the “Apple.” name could be used over and over again. I don’t think there’s anything malicious going on, but just the intent to spam a lot of news feeds.

So, if you want to avoid spam avoid these promotions promising a prize draw for unsealed stock.