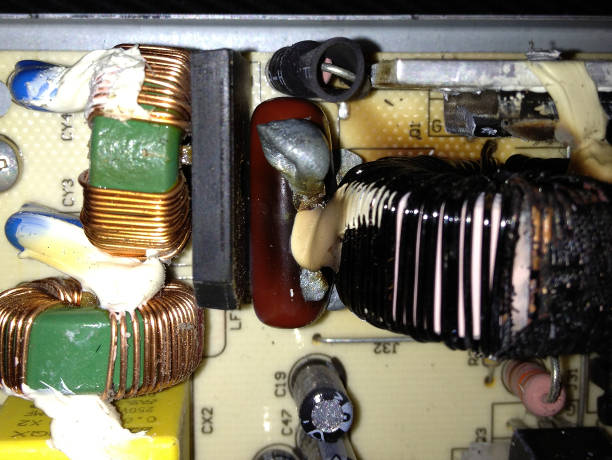 Why the change? Well, I was planning on switching to another host when the DSL was down for a week, but decided against it.

Yesterday, I came home and was greeted with the smell of burning electronics, which seemed to be emanating from the vents on the main OP-EZY Linux server!

This machine, is about 10 years old, and was on its third power supply (PSU). So, I took the machine apart, and discovered a popped capacitor right next to the power connection on the motherboard (which wasn’t that way before) and hoped that the PSU didn’t take out both of the hard drives when it went down too. I purposely used two drives in the event one got damaged, and the data should be safe on the other.

Thankfully, the drive I chose to hook up to my desktop powered on fine, and after installing the software RAID program onto my system, I was able to mount the drive and inspect and export its contents. Getting the MySQL database was more of a challenge, as the raw SQL files are not easily transferable but as the workstation I used was using the same version of MySQL, I was able to work around this issue.

I took the decision then to upload my blog (all 285mb of it) and its MySQL database to an account on 000webhost and  continue blogging from there. As this is no longer limited to the DSL line used by OP-EZY, the speed of the site should be increased. My blog may return to OP-EZY some day, but for now, I’m very happy with the service 000webhost provide for free.

But back to OP-EZY land, and as per usual, I decided to take apart the PSU to look at the point of failure: 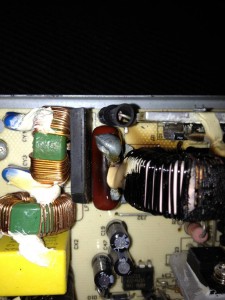 The exploded capacitor which caused a short.

There were a few bulging capacitors in this PSU, but the worrying one was the one in the centre of the image which ruptured, and cooled to form what looks like a solder blob (not sure if exploded capacitors of that type usually do that, I can’t find another reference to that happening on the internet), but it seems to have short circuited the inductor coil to the right (you can just see the charred colouring on the PCB under it).

I’m hoping that the vented capacitor on the motherboard caused the system to shut down before the PSU could take out any of the other components in the server (essentially, taking one for the team!) but it’ll take a while to test everything.

I hope to get OP-EZY back online properly soon, but until then, at least this site is back online.