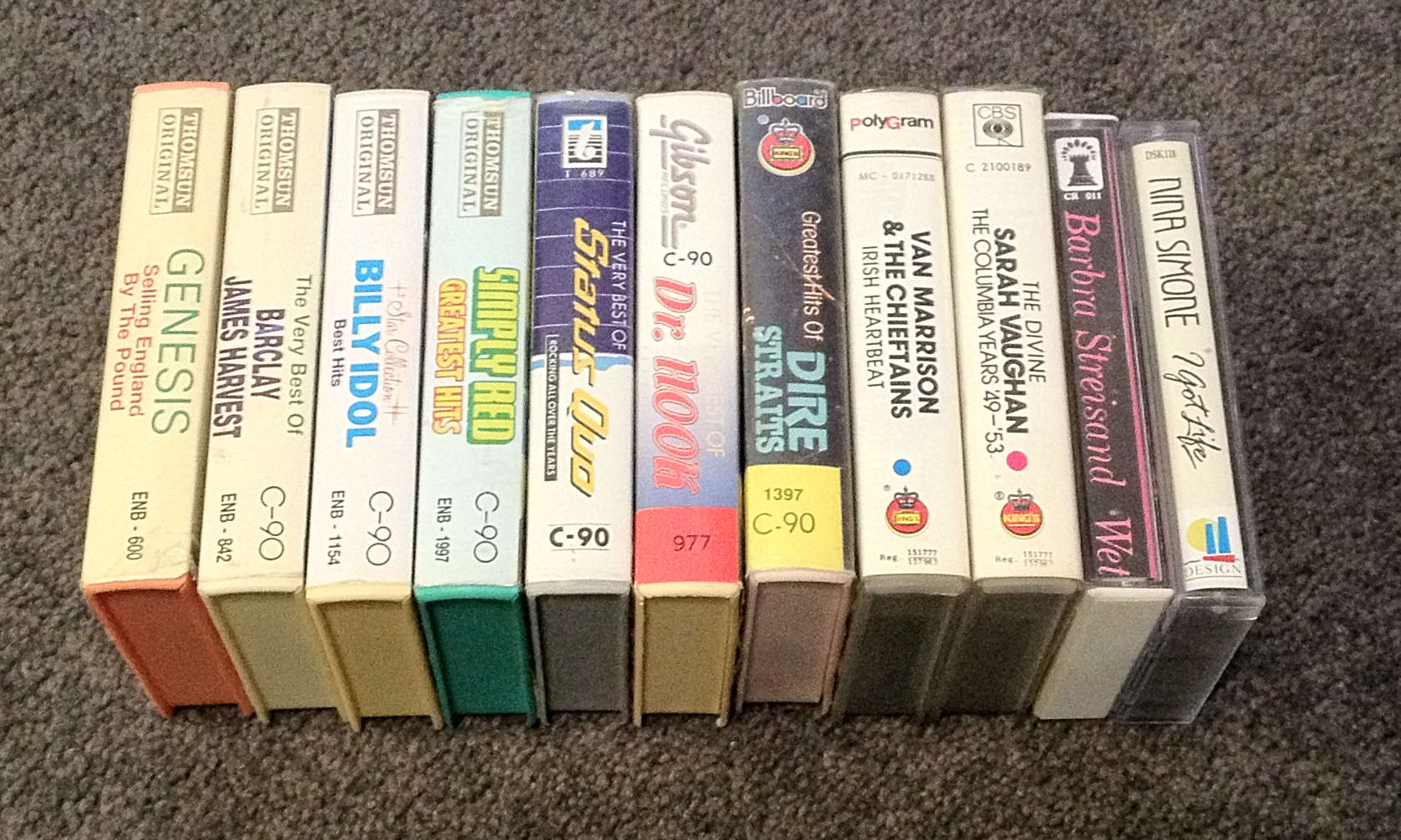 Before high speed Internet connections became common in homes, acquiring unofficial recordings of music and video were commonly done by trading physical copies. Either by getting your mate to copy an album off a record onto cassette, buying dodgy looking items from even dodgier looking people at boot sales, or foreign imports. Today, I’m going to look at the interesting collection of bootleg cassettes I have in my possession.

Disclaimer time again: Piracy is wrong, artists and record labels did not benefit from the sales of these albums. The audio samples included in this post have been used under the fair use clause stated in Section 107 of the United States Digital Millennium Copyright Act (DMCA) 1998 and Sections 29, 30, and 178 of the United Kingdom Copyright, Designs and Patents Act (CDPA) 1988 for non commercial review.

The majority of these were purchased overseas from countries which most likely didn’t have a company releasing official copies of the material on these cassettes. 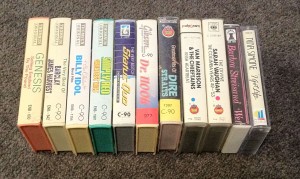 My collection of bootleg cassettes

The quality of these cassettes are usually very good*, especially as the majority of them are very obviously vinyl rips. But as with most bootleg/counterfeit products, a lot of time and effort has gone in to the visual appeal to attract the eye of a potential buyer, this includes colourful covers with reflective shiny bits.

There are also a few different approaches to what you could class each of these albums under. It’s often classed as a “Counterfeit” if a product is trying to imitate another, already released product. Here is an example of what could be classed as a counterfeit to some: 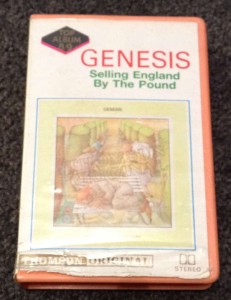 Here is a copy of Genesis – Selling England By The Pound, most likely ripped from a UK pressing released on Charisma Records, in this example, the complete album is duplicated, and presented as said album. Some would see this as a counterfeit rather than a bootleg. 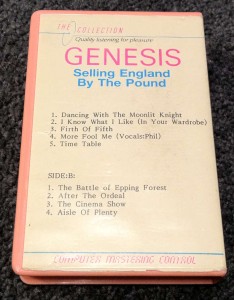 The back cover of the Genesis album

Interestingly, Thomsun decided to include two tracks from Genesis’s previous album, Foxtrot, to use as filler to use up the ends of the excess tape on each side (“Time Table” and “Horizons” (not listed) respectively).

The quality is very good on most of the Thomsun tapes, it’s obvious that this one is ripped from vinyl:

Now earlier, I mentioned that the bootleggers would go to great lengths to make the products look appealing to buy. There is a large contrast once you open one of these releases and see what’s inside: 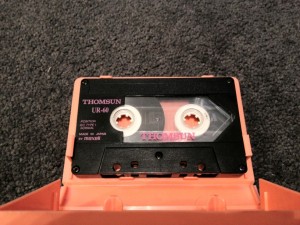 What we see is a blank looking recordable cassette tape made by Maxell re-badged with the Thomsun name.

Now, at this point I’m going to go into a little more detail about the Thomsun name. A bit of research shows Thomsun to be a large group of companies operating in the United Arab Emirates, still operating to this day. They provide everything from electronics to food. I wouldn’t be surprised if they sold blank cassette tapes under this name. So, maybe, some would say, did some group just come along, and take that name to create the “Thomsun Original” bootleg label?

I’m going to say no. A quick look on YouTube shows a video of the opening to a VHS released under the Thomsun Original name: 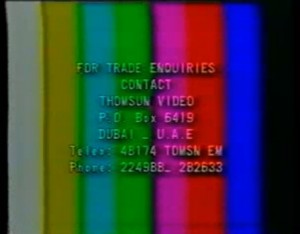 The majority of the addresses listed on the Thomsun Group of Companies website show the same P.O. Box number.

Now, a lot of the music I’m in to today is down to some of these tapes, the above was my first real taste of Genesis, just like the next was my first taste of the following artists: 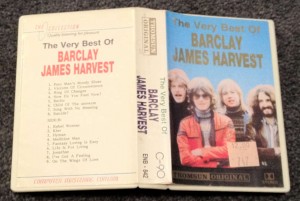 Barclay James Harvest. This one would be classified more as a bootleg, rather than a counterfeit, as it’s not really trying to be an album that’s already released. Rather, it’s a compilation of their work (some studio recording, some live from the Glasnost album). Again, most, if not all of the tracks from this album are taken from vinyl. 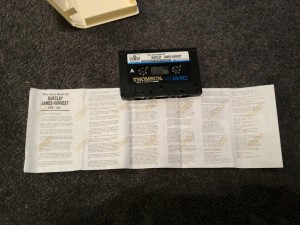 Inside the Barclay James Harvest box

Again, inside it’s just another Thomsun branded Maxell cassette tape, but also included is a lyric sheet for some of the songs. This particular album also has a little history of the band. My best guess is the Genesis one might have had a lyric sheet in it too, as the original genuine album had one in which could have easily been replicated by the guys at Thomsun.

For the next one, I have a proper scan of the cover: 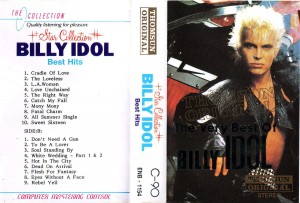 The quality of this one isn’t as good as the previous two, though it’s still a lot better than the example coming up later!

This next one is the final example on the Thomsun label: 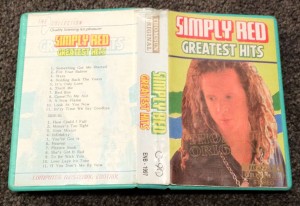 I have to admit, I listen to this one quite a lot, though there’s an error that occurred during the creation of this compilation. Two of the tracks are repeated, and two are missing. I later ended up re-creating this one from original CDs when making a digital copy of this one.

Interestingly, for the first time ever, I’ve seen a Thomsun tape appear on eBay which I already own, and it just so happens to be this one. 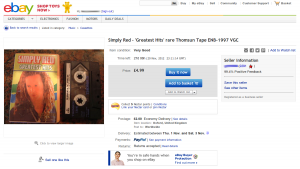 The Simply Red album on eBay

I was interested to see if the error on my tape was a one off, so I contacted the seller, who replied:

Hi, yes it’s the same on my copy! probably the same batch!

So that was interesting. Now, the following tapes aren’t from the Thomsun label. 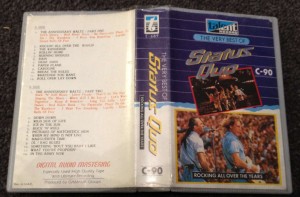 This Status Quo compilation is a very nice item, I guess this one could be classed as a counterfeit as an official compilation  called “Rocking All Over The Years” was released about the same time. This tape has the same songs as the official release, as well as two additional tracks “When My Mind Is Not Live” and “Anniversary Waltz – Part II”. This was my first real taste of Status Quo (all 3 chords 😉 ) and made me buy more of their albums.

Rather than using Maxell tapes, these bootlegs tend to use BASF (now known as Emtec) tapes.

Something interesting to note about all these bootlegs are that they shipped with the recording tabs still in place.

Now, for another guilty pleasure: 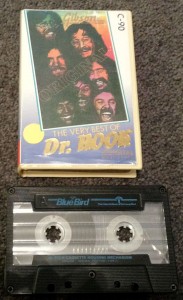 The Very Best of Dr. Hook (although, the lyric sheet says “The Very Best or Dr. Hook” 😀 ), this album features some quite obscure tracks of theirs which aren’t not that easy to find on CD today. Again, it’s on BASF tape. I personally find it interesting they decided to slap the word “Original” on the cover, emulating the style of the Thomsun tapes, though I believe they are in no way related, as Thomsun are based in the UAE, whereas, this tape has “Made in Indonesia” written on it. As far as sound quality, it’s not bad, a bit muffled in places though. 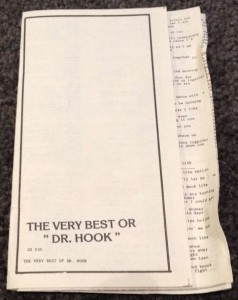 Error on lyric sheet, if you’re going to bootleg something, at least get the title right!

The lyric sheet included with this album has many spelling mistakes, or just completely wrong words. It may have been transcribed by someone actually listening to each song.

Another known name in bootleg distribution is “King’s”, the following is one that was also picked up in the middle east: 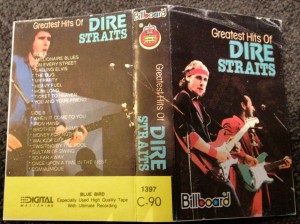 Greatest hits of Dire Straits, this one features a rare track “Millionaire Blues” which was available for a brief period in 1991. The only gripe I have with this album is that it plays a little bit too fast. Apart from that, it’s really very good. 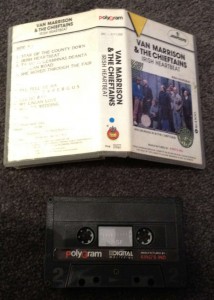 Ah, Van Morrison (or should I say Van Marrison – well done guys!), this was the first one of these I actually bought, rather than acquired. Again, from Indonesia, this is a direct copy of the original album, no bonus tracks. The quality is very very good, this could possibly be a CD rip, or a very clean vinyl rip. I can’t be sure on this one! I liked this album so much I ended buying the official UK vinyl release. 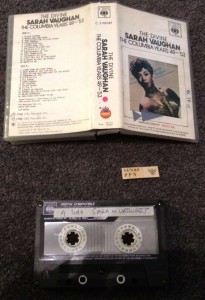 Sarah Vaughan, not a tape I’ve listened to much yet I have to admit, but I remember this one sounded pretty good too. The previous owner kindly labelled the tape so we know what’s on it. It’s interesting to note the CBS logo printed on what’s clearly a generic BASF tape mechanism. 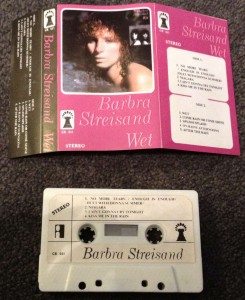 This tape is shrouded in mystery, I have no idea where it came from (Probably Saudi, but not certain). This, ladies and gentlemen, is the worst tape in this collection! Why? Well, when I finally found a legitimate copy of this one, it turns out the A and B side have been switched. But that’s not the worst of it, there is an awful lot of sibilance (lots of distorted “essy” sounds) which is probably to do with the fact the LP it was ripped from doesn’t sound like it’s been treated with the best of care, it plays too fast, and, most importantly, it wasn’t run through an amplifier that applies the RIAA equalisation curve which is used to allow a vinyl recording to sound right. Here is an example (warning, headphone users really should turn down their volume now!):

In this case, enough really is enough! No joke, the whole tape is like that. What you just heard wasn’t doctored in any way! That song is supposed to have lots of bass, after all, it’s a dance track. I did have a play with some remastering software but this was the best I could do:

Interestingly though, when trying to find a bit more information on the unknown bootleg label, I did stumble upon two more copies on different “labels” released, once again, in Saudi, on two relatively known bootleg labels: 747 and GMI 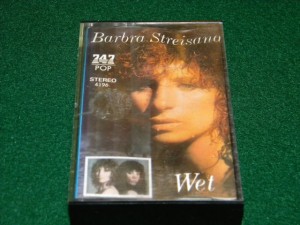 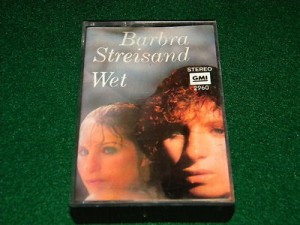 There are other pictures of these, both of which look very similar to my unknown one, the GMI one even has a round circle on the back of the box, in the same place a weird logo (MR) is on my copy.

Unknown logo that appears on the back of the Streisand album

Finally, to the last cassette in this collection: 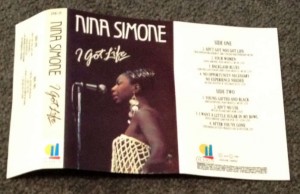 This one features live tracks I’ve personally never heard anywhere else before, the quality is pretty good too.

Well, I feel this post has gone on way too long, longer than I’d usually post anyways. As you can guess, I find counterfeit and unofficial merchandise rather interesting. Maybe at some point, I’ll dive in to my bootleg vinyl collection, which mostly comprises of Bob Dylan recordings.