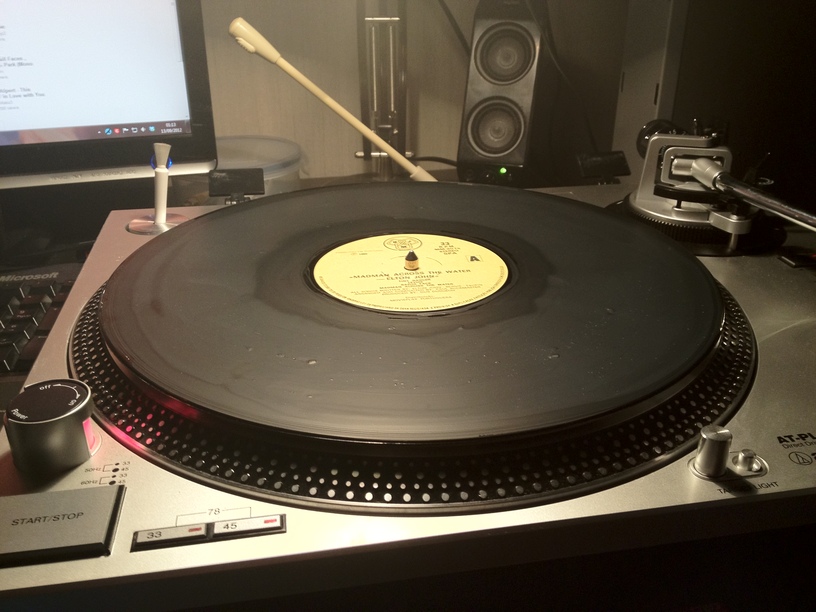 There’s nothing worse than picking out your favourite album to listen to on your turntable just to find it littered with crackles and pops, even though the LP looks clean.

Don’t get me wrong, I like a bit of noise on my LPs, it adds warmth, but if the overall volume of an LP is quiet, then the noise is going to be noticeable throughout the album.

Here is an example of an LP with moderate noise, this is a sample of the second track on the second side of Elton John’s 1971 album Madman Across the Water – Holiday Inn:

It’s important to note here that this particular pressing of Madman Across the Water originated from Portugal and doesn’t sound that crisp and clear in general, probably down to a multi generation copy of the master tape used to create the stamper. A general practice used when pressing albums in foreign countries.

Here is a picture of the record’s groove in question:

A lot of dust on the playing surface of the LP

As you can see, there’s a lot of dust on, and packed in to the groove. This gets interpreted as pops and crackles on the recording.

I had, sadly, just run out of record cleaning solution, and my carbon fibre brush could only eliminate some of the noise, so I decided to try a different method I had read a while back on the internet. This method involved using Wood Glue (which turns out to be PVA glue) to physically pull out the dirt. I guess the best way to describe it is that it’s like a face mask for records! So without further a do, lets try it out. 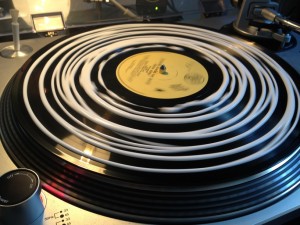 I decided to play it dangerously and use my good turntable for this. I fired up my turntable to 33 RPM and poured the glue on. Once I felt there was enough on there, I used a credit card sized card to spread the glue over the playing surface of the record. 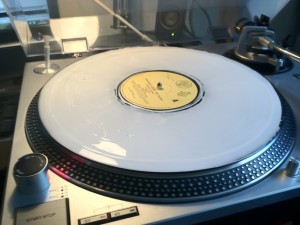 A decent layer of glue

At this point, I stopped the turntable and let it dry for half an hour. After that, I started spinning the LP at 33 RPM again, with a lamp placed above it to help the glue set. After another half an hour passed, the glue looked less runny, so I set my turntable to the 45 RPM setting. 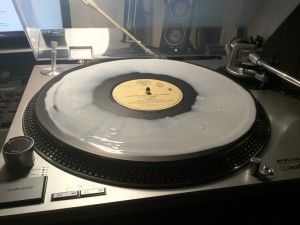 Glue drying after a few hours

After more time had passed, I sped up my turntable again to the 78 RPM setting, my theory being the faster the air rushes past the glue, the quicker it’ll dry. Not sure how well that works, but I like to think it does. 😉

About 8-12 hours after applying the glue, it’s fully set. 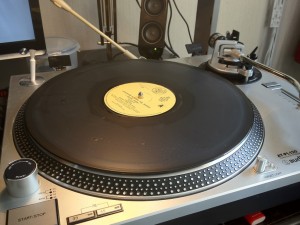 The glue is fully set

At this point, it should be ready to come off. The theory here is that the PVA glue will not like to stick to the PVC record, but will happily stick to the years of muck and grime accumulated in the groove.

To remove the glue, use a fingernail to carefully start peeling the glue from the outer edge of the LP 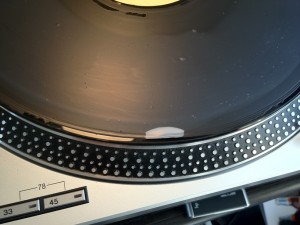 It should start readily lifting away. 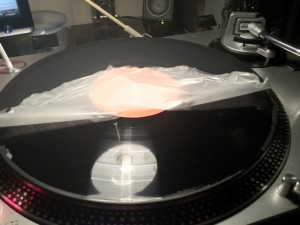 Coming off in one piece

If done correctly, it should more or less come off in one piece, if not, there probably wasn’t enough glue used. If this is the case, not to worry, just apply more glue and wait for it to dry, and when you peel it off it should take the old glue off with it. 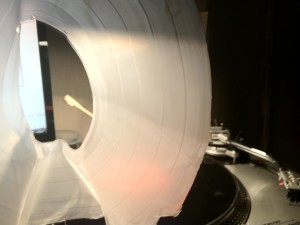 It’s interesting to see the groove of the LP as ridges in the PVA mask.

Lets have a look as how the LP looks now: 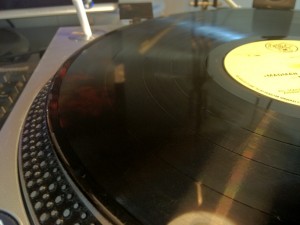 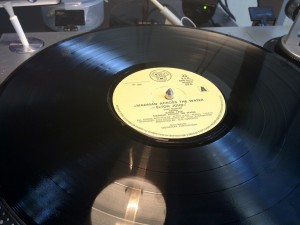 But the proof is in, of course, the listening:

As you can hear, the crackling is much less of an issue now. Of course, this disc isn’t in the best of conditions, so with a little help from Adobe Audition, the remainder of the crackling can be obliterated at ease, without having to damage the music too:

I have since tried this on an LP I picked up in Oxfam which had some really horrible, nasty loud pops all the way through, which I thought were permanent as nothing would shift them. The glue pretty much brought it back to an almost new sound! Needless to say, I’m impressed!

Hope this inspires some people to, quite literally, dust off their old record collection and get back into the groove! 😉