Ok, I want a raise of hands, who hasn’t noticed the huge amount of updates on various Google services recently?

First thing I noticed, was the new Google Search:

Now, that itself isn’t really that exciting, it works the same as before, but you have to admit, the new look is quite nice.

Also, RedmondPie.com reported that GMail has had a redesign too: 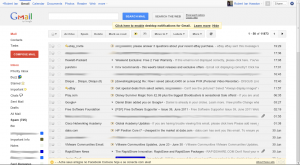 Anyone with a GMail account can get this right now, all you have to do is go to your GMail account, and go to the theme settings page, and select either “Preview” or “Preview (Dense)”. I personally prefer the Dense version as the regular one seems to take up too much space on my 13″ laptop display!

But why have these been redesigned? My guess, it’s another way of promoting Google’s new social networking service, which they hope to take on Facebook, Google+, which launched on 28th June 2011.

I really wanted to get a Google+ account so I could review it, so I went to the Google+ website, where I saw a tour of what they were hoping this project was aiming to achieve. 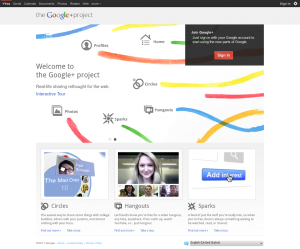 "The Google+ project: real life sharing, rethought for the web."

But then, I saw something that made me flash back to about 7 years ago: 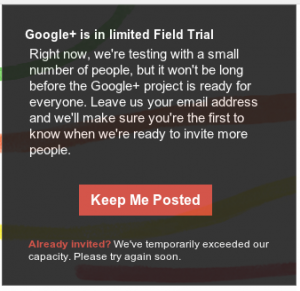 Like GMail, Google+ starts life as an invite only service

Yes, just like GMail, Google has decided to make Google+ an invite only service whilst testing. So I was unable to just sign up and start reviewing. If only I was invited by someone to use the service… 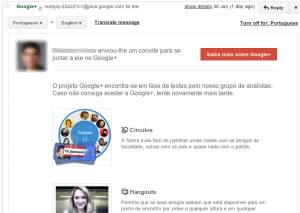 The next morning, I checked my email, to find my Brazilian mate (who started the S1MP3 project) had sent me an invite.

Annoyingly, this invite was in Portuguese, a language I can’t read! I thought “surely, when I follow the invite link, Google will see my Google Account is set to UK English”, sadly this wasn’t to be, so I had to guess my way through the registration process. Just to be extra evil, when I finished, Google+ was still in Portuguese! (even though the rest of my Google services were in UK English) But no worries, I eventually stumbled upon the language selection screen, and set Google+ to UK English.

Sadly, the groups (or, Circles, as Google calls them, but more about that later), were still in Portuguese, so I had to rename those manually!

This is why Google+ is still invite only, as these bugs still need ironing out!

But, finally, may I present to you: Google+ 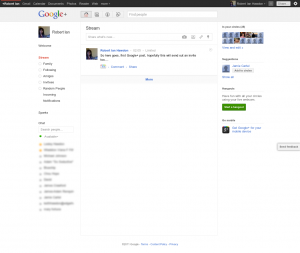 So the first thing I did was invite someone I knew to the service… 7 years ago, as mentioned earlier, GMail was also an invite only service. Back then, when I was still in High School, I really wanted GMail account, and a good mate, Dan Brain, sent me an invite. So, I thought it was only fair, to return the favour.

I decided to invite the mate that invited me to GMail 7 years ago.

So, with that out of the way, lets have a look at how you manage friends.

Google’s idea is that it’ll give you a list of people you know (taken from your GMail address book), and you can just drag them into categories, which they call “Circles” (i.e. a circle of friends), they create 4 groups for you by default:

Or, at least, that’s what I could make out by translating the default Portuguese.. just for kicks, I left “Friends” as “Amigos” to remind me where I got my account from 🙂

Google makes it easy to drag and drop people into your circles, and allows you to add more circles if you require them.

By double clicking on a friend who’s not on Google+, you’re given the option to invite them, but at the moment, Google have disabled this as they still feel Google+ needs to be tested more before releasing it to a huge amount of people.

Now, I hope Dan doesn’t mind, but I thought, as he’s one of the few people on this service, I’ll use his profile to show how others are seen on the new service: 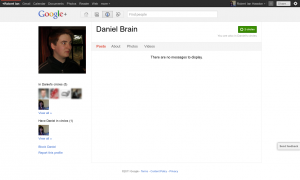 The layout resembles Facebook’s, but, in Google’s usual style, it’s shouts simplicity! On the left you see who your friend is friends with, and who you know in common. In the centre, you see his posts (in this case, none yet). Then you get to see more about him, by clicking the about link, or look at his photos and videos.

As Dan hasn’t put much on his profile, and I don’t want to invade his privacy by posting his about page, here’s mine: 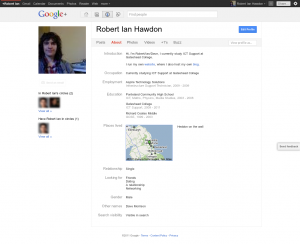 Posting on Google+ has a feature that I’ve wished Facebook has had for years. The ability to make a semi-public post. So you can post a message that only a certain circle of friend can view. Which I have demonstrated on my profile: 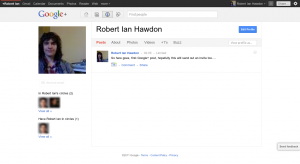 At the moment, using this can trick Google to send an invite to the people in that circle, I’m not sure how long it’ll be before Google close this loophole.

What haven’t I tried? Chats. Once I have enough people I know also using Google+, I can have group conversations with my circles, which sounds like a useful feature. For example, as you can put one person into many circles, you could create a circle for people in a group you know in real life (a college work group springs to mind), and use Google+ to host a group discussion. Again, this is a feature I really wanted on Facebook!

Individual chats can be done too, and Google are using the system they’ve been using for years in GMail and iGoogle. This system is based on XMPP, and has been more stable than Facebook’s chat service has ever been!

All this looks really interesting, and 3 days into the Beta programme, I know Google will be rolling out new features over the next few months. But the big question is:

Well, Google have tried twice before to get a grip on the social networking market: Google Wave and Google Buzz. Both of these were classed as failures. But this time, Google+ has been given huge publicity in various tech sites, and quite a lot of people are talking about it.

I hope Google can pull this off, their system sounds promising, and I’m really excited to see what’s round the corner, are you?