So, recently, I had the choice on two topic to blog about, and as I haven’t made a post for a while, I decided, why not blog about both of them? So, here is the first, regarding an issue that occurred last month, regarding the BT HomeHub with Linux users.

UPDATE 2011-09-01: BT have announced an update for the 2.0B homehub on their forum, which, amongst other things, fixes the issue with Linux based systems (including Android phones). More details below, and on the BT Forum.

So, last month, I turned on my computer one morning to find it wouldn’t connect to my router. It seemed to time out after trying to get its IP address automatically from the router. I restarted into Windows, and instantly connected. I thought “that’s strange, I don’t even remember doing an update to my system though could have introduced a bug that would do this”. So I got my Ubuntu Live USB drive and ran it on another machine, and low-and-behold, it wouldn’t connect either!

As it wasn’t getting an IP address from the router, the first thing I tried was setting my IP address manually, which Network Manager on Linux based systems makes very easy to do (if you’re familiar how to set up a static address on a network at least). This workaround worked fine, and I was soon back online. (And as an added bonus, The Linux Network Manager is set up to allow you to set up Static IP address on a Per WiFi network basis, meaning if I move to another network, there’s no chance of an IP conflict) 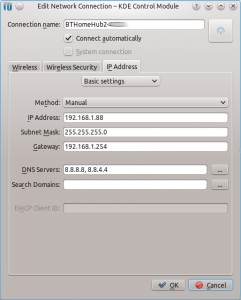 Network settings on my Laptop

But what could be causing this? My network seemed to be denying Linux machines that were requesting an address via DHCP. To confirm this, I took my laptop to College, and instantly connected to their internal network with no issues. So, my attention turn to my DHCP server, which just so happens to be built into my home network router.

My Internet is provided by British Telecom (BT) who insist you use their own router, the BT HomeHub. When we first got connected to this ISP, we were given what’s known as the HomeHub Version 1.0, which was a large white box. This router has to be one of the worst routers I ever had to use (with exception of the Belkin F5D7630-4A which overheated in less than 24 hours, but I digress). The only reason I put up with it, was the fact we use BT’s VoIP phone service, which only works through that router. Even then, people always complained that the phone calls, though clearer, would echo what they were saying.

Eventually, I’d had enough of the constant router crashing, and ended up spending a fiver (at the world’s favourite online car boot sale!) on BT’s newer HomeHub Version 2.0B. Until last month, I had no issues with it, far fewer dropouts, clearer VoIP calls, and a faster configuration interface. That was until the router decided to automatically upgrade itself to “Software version 4.7.5.1.83.3.18”. I have pinpointed this down to the issue I’ve been having with my Linux machines, and with this, I did a quick google search, and came up with this forum post which confirms my findings. What really annoys me is that I didn’t ask for this upgrade, and yet BT decided to install it for me anyways!

This doesn’t just affect Linux desktops and laptops, but also mobile devices which use Linux at the heart of their system, which means, any device using the Android mobile system.

BT Claim they are unable to reproduce this problem themselves, so are unsure when they can release a fix, and they are not going to roll out a downgrade either. They claim that resetting the hub to it’s factory settings will solve the issue, but many other people say the issue comes back after a few days. So for now, I’ll provide some settings that should be put into your device to configure a static IP address:

You’ll need to go to your network management system (as I don’t own an Android device, I’m not sure on the location of these settings on said device), and set your method of obtaining an IP address to “Manual”

You then want to fill in the following:

We’ll just have to see how long it takes for BT to fix this.

UPDATE 2011-09-01: The following message appeared on the BT forum this morning:

I have some news on this for you.  The next firmware update for the Home Hub 2b will be rolled out starting from 6th September.  This updated firmware includes the fix for the Ubuntu issue being discussed on this thread.  As with all firmware rollouts, this will take a number of weeks, and the new firmware should be delivered to all by mid-end October.

The firmware rollout is an automatic process and the updated firmware will be delivered to your hub at some point over the course of the update cycle.

Looks like this issue will finally be resolved 5 months after it was first reported!