Fun fact: nowhere on the system does it say “Windows 8”, that just seems to be what they’re calling it on-da-streets. But for the purpse of this review, I will refer to the system as “Build 7955”.

So, I finally get my hands on Microsoft’s next operating system. Now, it’s not the one that’s currently in the news (Milestone 3, or Build 7971), because, to my knowledge, it hasn’t been leaked yet. So we’re going to make do with this. 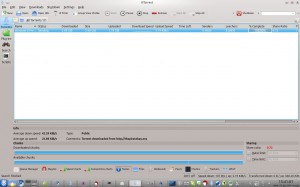 I started googleing for the image, and found build 7955 on a popular bit torrent site, and downloaded it. Once it finished downloading, I loaded this image into VirtualBox and started the installation. About to start the installation

The first thing I noticed, and probably everyone else does looking at the screenshot above, is that it says “Windows 7″… eh? Well, what we have to remember is that this next version of Windows is so early in the planning stages, that even its name hasn’t been finalised. So the developers at Redmond haven’t needed to modify the installer at all. 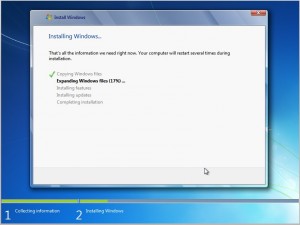 So, I let the installer run its course, and after a few minutes, I was ready to start first boot. As the rest of the installation is pretty much the same as Windows 7, I haven’t included any screenshots.

After initial configuration, I found myself at the desktop of my new Windows installation. 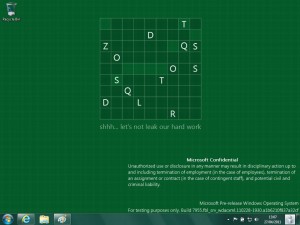 The first thing we see, is a development in progress type background, pleading that whoever is using this not to leak it to the public. Oh well, looks like someone wasn’t listening! Personally, I’d be quite worried just by reading the, obvious scare tactic, legal mumbo jumbo!

Not being a Microsoft employee, I’m not too worried.

As for the desktop itself, the only difference I see, is a new icon in the bottom right of the screen. This allows someone to access their account details on the system, rather than having to use control panel.

Sadly, the VirtualBox drivers won’t install on build 7955, even when run in Windows 7 compatibly mode, which is rather annoying. Luckily, I was able to set VirtualBox to emulate an Intel Ethernet card, and Build 7955’s built in drivers was able to use that to connect to the internet. 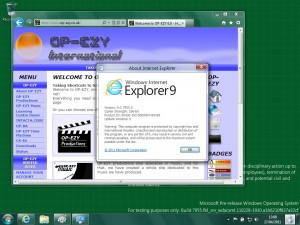 Build 7955 comes with Internet Explorer 9. I didn’t go into great depths to explore (no pun intended) this browser, as I haven’t used IE9 on Windows 7, so I don’t really know if there’s anything extra on here. As far as I know, the applications on Build 7955 are identical to Windows 7, as Redmond will just be focusing on improving Windows itself. But as you can see, Internet Explorer has no trouble loading up the OP-EZY website. My theory about applications not being any different to the Windows 7 versions were backed up when I loaded Windows Media Player, which is pretty much identical to the version included in Windows 7. 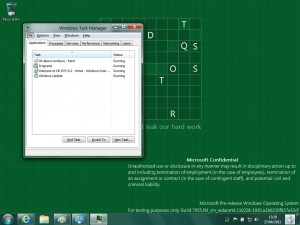 One thing I did read about was the glorious new “Advanced Task Manager”, which I was eager to try out. So I gave Build 7955 the good ol’ Three Fingered Salute and selected task manager… and was presented with the same version as you get in Windows Vista and 7… that’s not what was advertised in the brochure! 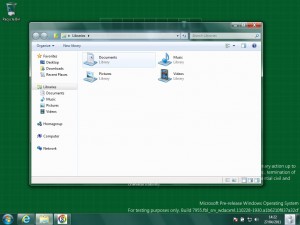 At this point, I was sure I must be missing something, and indeed I was, I found out I needed to enable some features and replace some DLL files from a later build. After this, we get these nice new features: 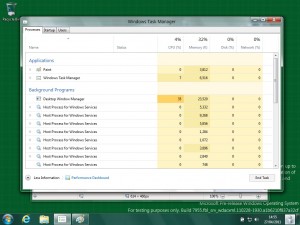 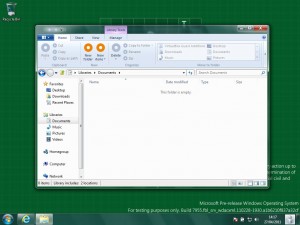 The new task manager could come in very handy, it is far more detailed than the old version. The ribbon interface on explorer still needs a little more work done on it. Mainly because the icons haven’t been created yet, so if you’re like me, and think in icons, it could take a while to find what you want.

Another new feature is the ability to log in with a pattern, rather than a password, so I attempted to set this up: Well, after I set this up, the log-in screen wouldn’t show the boxes to input my pattern, or a password box. I was left with a screen showing the date and time, with no way to exit that screen. So I had to go into safe mode to disable my pattern. 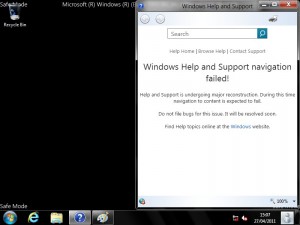 This is where I find out that the documentation in safe mode is still being rewritten, but not a problem, I was able to disable the pattern log on without it.

…and that’s pretty much it. 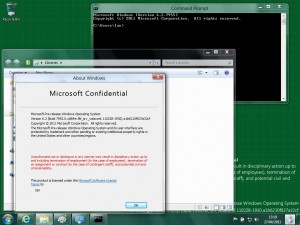 Would I recommend replacing your Windows 7 installation with Build 7955? Of course not, it’s nowhere near ready! Manufacturers aren’t writing drivers for it yet and it’s still unstable. There are not really enough new features to warrant ruining your working Windows Environment. But if you want to play with it, either do what I did, and use a Virtual Machine (though, in my case, this was really slow), or use a test machine.

I, personally, am looking forward to see what Microsoft come up with for this new Operating System, and will be trying to keep up with the milestones, betas and finally release candidates.