Where in the world is Dave Morrison?

Ok, yeah, that doesn’t quite have the same ring to it as “Where in the world is Carmen Sandiego?” but nevermind…

So yeah, the reason for this post, well, it’s because of the recent news that Apple has been storing information on where their iPhones have been, and recently, 2 programs have been released to allow anyone to view this data. Some people say this is a bad thing, but to be honest, it doesn’t bother me, as I have nothing to hide, and to see the places I’ve been are quite fascinating! 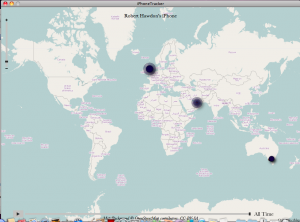 Where I've been in the world since getting my iPhone 3Gs

As you can see, my phone shows 3 places I’ve been, the UK, (obviously), Australia, and Dubai, where I had my phone on when I was on my way to Australia. 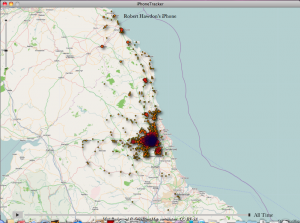 And from that picture, you can see the areas I have visited most often at home. Mainly Newcastle Upon Tyne and Gateshead, but some spots going as far north as the Scottish border, and some further south. 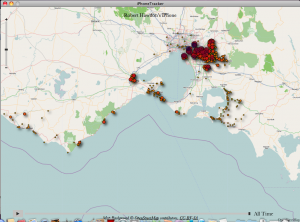 I was in Australia for 5 weeks, these are the areas I visited during that time, as you can see, I spent most of my time in the eastern suburbs of Melbourne, but my 3-4 days on the Great Ocean Road (The dots on the coast on the left of the picture) were also tracked. I’m actually quite amazed how far we travelled on that trip! 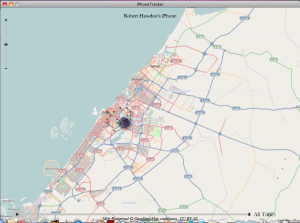 And finally, on the way to Australia, the plane stopped in Dubai, and yep, my iPhone recorded that too!

What does this mean?

Well, not much really, Apple says that this is done to improve apps, and their customer service, and that data is used to improve their GPS location services. But some argue that storing all this data is unnecessary, and that this data is stored unencrypted on the iPhone. Yes, it does mean anyone who gets their hands on your iDevice can see where you’ve been, but in most cases, they won’t be able to distinguish what all the dots on the map mean! (I mean, I’ve been to all the places in the above pictures, and I can’t remember exactly what I was doing in all of them!)

So, should you be worried about this? Absolutely not! Most people don’t have anything to hide, so being able to look at the data stored on your iPhone, the way I just did before, could actually be quite fun 🙂