Ok, so I’m out in Australia at the moment, and, as some people know, I’m an iPhone user. I decided that I would try and save a bit of money by avoiding hefty roaming charges!

In the UK, I am on the O2 network. Naturally, being a computer Geek, I originally jailbroke my phone 3Gs, and used Ultrasn0w to unlock it. But then I decided I wanted to upgrade to iOS4.1 as soon as Limera1n was released.

I did this, but then I totally forgot about it upgrading the baseband, meaning I was stuck on the new 05.14.02 firmware. This meant I wasn’t able to unlock the phone to use on any network! Then I found out you can get O2 to unlock the iPhone 3Gs for free. If you’re on your first year of Pay & Go, then you will lose the rest of your Free year of Web and public WiFi access.. This was enough to make me switch to a £15 a month contract!

Once I had entered my details into the web form, a few days later I received a text saying my phone has been unlocked. What I wasn’t told was that I had to sync with iTunes to finish off the unlock procedure. 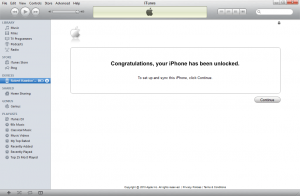 iTunes showing my phone had been unlocked

After that, I turned “Data Roaming” off in the iPhone’s settings, this will stop me getting billed by O2 for automatic email retrievals!

Once in Australia, I headed to the Knox City Shopping Centre and bought a Pre-paid (Pay & Go) SIM card on ” ‘yes’ OPTUS “, which give reasonable deals on calling, texting and, most importantly, data plan! I put the new SIM card in, and, after activating the card, was able to use my iPhone in Australia!

To clarify, because I got O2 to unlock my iPhone, I am able to use any network, in any country (obviously, with their SIM card), even on the new Baseband firmware, and on every upgrade from now on… Jailbroken or not!

So, if you’re on the latest version of the iPhone firmware, and you can’t unlock it with any of the jailbreaking methods, and you wish to switch providers, for whatever reason, check if your provider will unlock your iPhone, as that is definitely the easier option!