Many people who saw the return of the popular UK talent show on Saturday night will have, undoubtedly, noticed something strange about the contestants who were considered good enough to go onto the next stage of the competition. 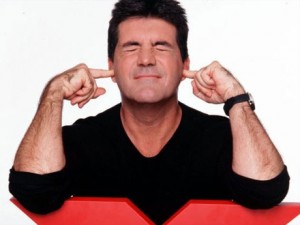 I am unsure what Mr. Cowell thinks of autotuning the contestant's auditions

I noticed it, but that makes sense being an audiophile, but it seems it was so noticeable that it’s become one of the most talked about issues of the week, even making the news… Of course, what I’m talking about is the dreaded Autotune!

Have a look at the following video (from the official X Factor youtube channel):

That was Gamu Nhengu, performing her own arrangment of Katrina and the Waves’s Walking on Sunshine.

Right from the start, (from the “woo-oo-oo-yeah” ) to the end, we can hear the unmistakeable “wobbly” effect brought on by the autotune module.

Autotune is designed to aid artists to either sustain notes, or achieve notes they could not naturally reach. Sometimes it’s used in live performances if the artist hasn’t quite got the voice strength at the time of the gig. Some people, who can’t sing, use autotune to the extreme to make them sound like they can. (Though in most cases, just to parody people who use autotune)

Autotune isn’t perfect though, and that’s why we here the “wobbly” effect as the machine is matching the vocals to a key that it thinks is in the right tune.

X Factor have admitted to using auto tune on Saturday night’s show (and the rest of the upcoming audition shows) but only in post production. This means that the people who were there, along with the judges, only heard the raw vocals, unedited.

The down side of this is that, obviously, we, the viewer, have no idea just how good/bad each contestant is. I personally liked Gamu Nhengu’s audition, but I’m not sure how well she actually sang because of ITV/X Factor’s obsession with autotuning the good performances! As the crowd seemed to like it, I’m guessing she sang well, but then that begs the question “Why autotune in the first place?”. It’s also worth noting that the bad auditions weren’t autotuned.

Personally, I think ITV should re-edit the audition shows again, this time without any autotune, that way we, as the viewer (who will most likely end dialing premium rate numbers to vote for them), decide who’s good and who’s not, and who has progressed the most since their first audition.

Thankfully, X Factor have said that they will not be using autotune for the live shows later on in the series.

In my opinion, it’s down to the case that “any publicity is good publicity”, and I bet the directors at X Factor knew something like this would be talked about, and make more people aware of the show and make them want to see and hear for themselves. Sadly, I think this could also have the opposite effect, and cause people to stop watching as it just sounds “too fake”.

That’s my opinion, and I’m sure there will be many others, I would like to hear your opinions so, please, feel free to comment, I look forward to reading other peoples thought on this.

It was publicly announced a few days ago that Simon Cowell demanded the rest of the audition shows to be re-edited, to remove any autotune that might have been used. Last night’s show aired without autotune! I think many people agree the show was much nicer to listen to!

I hope they’ll show a re-edited version of the first week’s show at some point, but maybe that might be just wishful thinking!